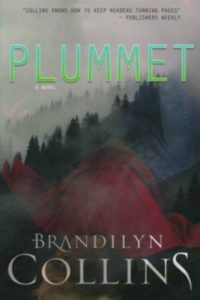 The latest thriller from Christian author Brandilyn Collins is Plummet (Stonewater Books). A desperate woman is forced to decide how far she’s willing to go to protect her daughter. In this exclusive Q&A, the author explains what inspired this nail-biter, how she creates her characters, and the best way to support your favorite authors…

Your thriller Plummet is about a woman who’s asked to do a horrible thing–cover up a murder–to protect the life of her daughter. What inspired Plummet?

My Seatbelt Suspense® novels typically portray a likable heroine—the “woman next door”—in some serious trouble. In the case of plotting Plummet, I had the original idea of a woman forced to help her boss hide the body of someone he’s murdered. If she does that—then what? She’s trapped with this lie and deed for life.

Once I had that basic premise, I built upon it, asking such questions as: What kind of woman would be most vulnerable to this predicament? What would be going on in her life that would compel her to do go along with such a terrible thing?

From there I built the character of Cara, a new divorcee who was abused by her father in childhood and then her husband. She’s a victim, used to being a victim. Hasn’t known how to fight back. Then I upped the ante by giving her a thirteen-year-old daughter who’s being bullied and has been suicidal. Now Cara must protect her daughter and teach her how to be strong—when she, herself, is anything but strong. Especially after she’s allowed her boss to force her into this terrible criminal act. It’s a compelling dichotomy.

It’s also a tricky premise, because many readers would immediately think, “Well, I would never allow some man to force me to hide a body.” But the reader who would think that isn’t Cara. I needed to create a character so vulnerable in this situation that she sees no other choice. A character who is believable and empathetic to the reader.

The whole thrust of the book then becomes—what now? There is no good way out of this situation for Cara. And then, of course, being a Seatbelt Suspense® novel, things get worse from there.

As a Christian who writes pulse-pounding suspense, what are the challenges of writing crime fiction from a Christian worldview?

The four-point brand promise of my Seatbelt Suspense® novels is: fast, faced, character-driven, with myriad twists and an interwoven thread of faith. Notice that the faith thread is last. I never sit down to write a Christian suspense around some theme. I want to write a fast-paced, gripping story.

As I write that story, the message of God and His love and mercy begins to emerge, based on whatever the main character is going through. In that way, the theme is not forced upon the story but is “interwoven” into it—a natural progression of what the character learns through her struggles.

Do you base your characters on real people, or are they all made up from scratch?

They are created in my mind. As noted above, they are typically created after I think of the basic premise. I then set out to build characters—especially the protagonist—who would be the most overwhelmed in that particular situation. This creates the highest of stakes for the main character—which then leads to high tension in the story.

What do you want readers to take away after reading Plummet?

There are numerous themes touched on that I’d like readers to think about. One is the vulnerability of someone who’s been abused (as in the case of Cara) or bullied (her daughter). Those people have been deeply hurt and need time and God’s help to find their strength. The rest of us should help them along, not judge them for what we consider “weakness.”

Another main theme is God’s mercy in all circumstances. I want readers to know they cannot “plummet” farther than God can reach.

What do you consider the best way(s) for readers to support their favorite authors?

Simple. Buy the book—and understand its worth. A novel is a product available after months of very hard and stressful labor. People might buy a $5 latte and think little of it. And yet they think twice about putting down $5 for a book that will give them hours of entertainment. I’d far rather talk about the creative aspect of writing.

But the reality is—the author needs to make an income in order to continue those creations. I’m so grateful for my readers, who allow me to keep creating!