Spotlighting those whose everyday jobs make them extraordinary.

Best-selling Suspense author Susan Sleeman writes romantic suspense set in the world of government security and law enforcement agencies. In the first book of her new Homeland Heroes series, Seconds to Live (Bethany House), FBI Agent Sean Nichols and U.S. Marshal Taylor Mills must professionally work through their painful personal past to capture a hacker who has compromised the safety of people in the Witness Protection Program. In our interview, Susan shares how her new series begins, explains how she prepares to write about her characters, and also gives us a peek into her other recent series Truth Seekers.

Susan, what can you tell us about your new series Homeland Heroes? 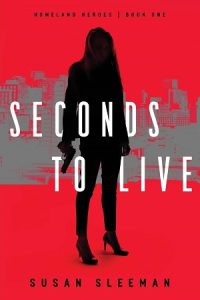 This series is about heroes that we don’t typically think of as heroes, and as the titles suggest—Seconds to Live, Minutes to Die, and Hours to Kill—each book references time. The fictional RED—Rapid Emergency Deployment—team boasts members of the FBI, DHS, and USMS, (US Marshal’s Service). Sean, Kiley, Mack, and Cam are a powerhouse of a team who don’t let anything, not even a clock ticking down to assured destruction, stop them from bringing the worse of cyber-criminals to justice. These men and women fight against the clock to save the country from serious danger, working behind the scenes to keep our country safe from internet threats. They don’t make the news, but I consider them heroes.

The first book in the series is Seconds to Live. How does that kick off the series?

Time is ticking down in all of the Homeland Heroes books, and in Seconds to Live, a hacker has compromised the WITSEC (Witness Security Program) database and is selling or auctioning off the data, putting witnesses’ lives in danger. The team must find and stop this hacker before thousands of witnesses are killed. This book is a race against the clock, pitting the RED team against the cunning hacker, and they are challenged to their maximum. I feel like Seconds to Live does a good job of meeting my goal to provide the reader with fast-moving and high-stakes stories where unsung heroes shine.

What about FBI Agent Sean Nichols and US Marshal Taylor Mills made you want to tell their story?

First, I wanted an interesting and unusual romance angle that I had never seen done before. I wanted the hero and heroine to like each other, to know each other, but never have seen each other. Or even seen a picture of each other. And I needed them both to be in a place in their life where they didn’t want a romantic commitment so neither of them would want to pursue a relationship and dig deeper. An online friendship was the answer.

To make it seem even more certain that they would not meet, I placed them on opposite coasts from each other. When the story opens, and the investigation brings them together and they see each other for the first time, it’s a life-changing event for them that the reader gets to enjoy, too.

I chose their professions and created the plot to make them be at odds with each other as the story opens. Taylor wants to protect her witness, hold back and take her time while Sean wants to solve the crime, and he’s gung-ho in using this witness to get to his goal. The resulting conflict puts them at odds right from the start, and yet, they have an underlying friendship that they have to take into account.

Many of your romantic suspense novels involve professional members of law enforcement. What attracts you to writing about these agencies?

I had the honor of being selected to attend the FBI’s Citizen Academy. This was a chance to meet for six weeks with FBI agents at the Portland FBI office while they shared their job responsibilities. It also included a fun day at their gun range where I got to shoot weapons including machine guns with these fine agents, plus blow up bombs with the bomb squad. I even got to push the plunger and detonate one of the explosions. Talk about an exciting and memorable day!

During the sessions, I learned a lot of facts and details that have informed my writing, but what I learned more than anything during this time was the heart of service these men and woman have. The heart to protect you and me from criminals and terrorists even if it means giving of their life.

Since then, I have attended a local police and sheriff citizen academy, and I have developed a tremendous respect for our law enforcement officers. In my books, I try to share what officers go through on the job in a realistic way so readers can see how heroic they really are.

I can’t even imagine running into danger when called to do so, and by their sacrifices, we are all allowed to live our lives. What better group to write about? And if that’s not enough of a reason, I am fascinated by the work they do. The procedures. The weapons. The forensics. All of it interests me, and I like to keep up on cutting-edge equipment, procedures, and techniques to share with readers, too.

Click thru to discover the research she does–and about her new Truth Seekers series!