The author on how her mysteries are driven by a moral compass and her convictions.

Toronto-based novelist Rachel McMillan is a history enthusiast, lifelong bibliophile, and author of the Herringford and Watts series. When not reading (or writing), Rachel can be found at the theater, traveling near and far, and watching far too many British miniseries.

She continues her Van Buren and DeLuca Mysteries with Murder in the City of Liberty (Thomas Nelson): Hamish DeLuca and Regina “Reggie” Van Buren have a new case—and this one could demand a price they’re not willing to pay.

In this exclusive interview, Rachel shares how her own illness informs her sleuth, explains how she gets the historical details right, and outlines the challenges of writing crime fiction as a Christian author…

Rachel, Murder in the City of Liberty is your latest mystery starring Hamish DeLuca and Regina “Reggie” Van Buren. What can you tell us about your sleuths? 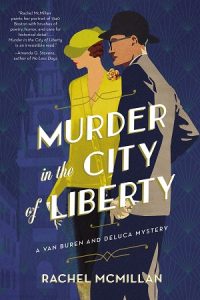 Hamish suffers from a panic and anxiety disorder during a time—the late 1930s—when mental illness was heavily stigmatized and often resulted in mercury pills and a stay in a sanatorium, even shock treatment. Hamish tries to hide his symptoms but during his first big trial as a new lawyer in a Toronto firm, he has a panic attack that propels him toward adventure.

He moves to Boston to spend the summer with his suave and enigmatic cousin Luca Valari and ends up staying, finding that his illness allows him a perception and empathy perfect for amateur sleuthing and using his legal skills to assist immigrants in the North End who cannot afford defense or consultation.

Hamish has a good heart and is a fantastic dancer. He loves lemon cannoli and cycling across Boston and he particularly has a soft spot for his partner in crime and “Girl Friday” Regina Van Buren.

Oh, let’s just lay the cards on the table: He’s flat out madly in love with Regina Van Buren.

Regina “Reggie” Van Buren can trace her lineage back to America’s first affluent families. A self-proclaimed “ex debutante”, an unwanted proposition propels her to Boston where her path intersects with Hamish’s. Soon, she has traded high end clothes for cotton and oxfords and with her Journal of Independence in tow.

Reggie truly comes into her own in the series: whether traveling across the city on the front of Hamish’s handlebars or providing pro bono work at the Unemployment Agency, her view of the world expands, and she finds herself falling for the exact opposite scene of her rich and privileged childhood. She also finds herself falling for Hamish and their relationship reaches a crucial point in this story.

How important is the historical setting to the story? What kind of research did you do to get the details right?

I try to be as authentic as I can in my presentation of history—but also allow for the fact that historical fiction is a lens through which we can approach history. To this end, it is most important for me to capture the sensibility and essence of a time period and hopefully inspire readers to jump into the history on their own.

My favorite historical fiction acts as a gateway or bridge from which I research and seek out more about a topic or time period and I hope that Murder in the City of Liberty functions the same way for readers.

For this series, I spent a lot of time in Boston which, luckily, is an hour flight from my home in Toronto. Boston itself, especially the North End, will hopefully as alive to readers as the human characters and so immersing myself in the city was where I started.

I would take my notebook on research trips and walk for hours: stopping to take notes or make a snapshot of a scene. I mapped where Reggie and walk and Hamish would walk and how they would get from Point A to Point B.

While Boston retains so much of its layout and history, I added another layer by researching at the Massachusetts Historical Society. I studied maps from the 1930s and early 1940s and cross-referenced them with my manuscript. Of course, since Hamish and Reggie’s time, highways and development and thoroughfares and street names have changed.

For Murder in the City of Liberty specifically, I spent time with an authority on Cyrus Dallin, the sculptor whose sculpture of Paul Revere features in a pivotal moment in City of Liberty. I also spent a lot of time at the Old North Church with its historian to try and get a sense of what the church looked like in the 1930s and how I could factor it as a major emblem in Hamish’s life and world.

Because baseball is a passion of mine and because it features in City of Liberty, I toured Fenway—which was hardly a hardship). I also enjoyed Ken Burns’ visual history of baseball in America which was the basis of his well-known documentary.

Before I start a series, I do all of the “umbrella” research: I watched films to capture the cadence of the dialogue and popular slang, I researched makeup and clothes and cars and the overview of the political and social and cultural constructs of the time period.

When we get to City of Liberty, Hamish’s country is at war while America is not. I zoned in on the looming prejudice and anti-Semitism finding shocking revelations about some of the darkest viewpoints of this time period—many popularized by Henry Ford!

I also color in the series with my personal passion for American Revolutionary history which is represented through Hamish’s best friend Nate Reis’ passion.

What are the themes or ideas running through this novel? 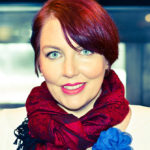 Forgiveness is a strong theme in the book and how to have the grace to step back and release vengeance and retribution. In the middle of City of Liberty Hamish takes a drastic action borne of his desire to take law and judgment into his own hands. When his well-intentioned plan backfires, he learns from two wise influences in his life that the only way to stop a cycle of hatred and judgment is to forgive.

Grace is another: time and again I find myself bowled over by the grace these characters offer one another. It is perhaps the great unifier. There are moments of grace given even by the characters who perhaps do not wear the heroic “white hats” of the series.