In an eerily plausible, action-packed dystopian series, survival will be threatened and faith will be put to the ultimate test as a raging storm engulfs America. Raging Storm (Harvest House) is the second volume in Vannetta Chapman’s Remnant series. In this Q&A, Vannetta explains how she built the world of her series, the challenges of playing “what if” while keeping her story in the realm of possibility, and what it’s like being prolific in multiple genres…

Q: WHAT INSPIRED YOU TO WRITE THIS DYSTOPIA TRILOGY? 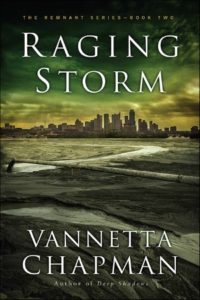 I was already writing Amish fiction for my publisher, Harvest House, when the senior editor asked me, “If you could write anything at all, what would it be?” I’ve long been a fan of dystopian stories, mainly because they challenge me to question whether I’d be smart enough, brave enough, and faithful enough to survive such times. But the one thing that seemed to be missing from this genre was a faith-oriented perspective. If the world were falling apart around your ears, wouldn’t it be natural to call out to God? I think it would, and so the idea for The Remnant was born.

Q: HOW DID YOU GO ABOUT BUILDING THE WORLD OF YOUR STORY?

The trilogy begins in small-town Texas, where I live, then progresses to Austin, our state capital, and finally ends in the Flint Hills of Kansas, a place I visited a few years ago. Of course, what I describe in the Remnant looks quite different from what you’ll see today–no electricity, no supplies of food or medicine, very few city services, little or no police protection. It’s literally neighbor depending on neighbor.

In some ways this was very easy to envision, but other parts were a bit more difficult. What would downtown Austin look like in such a scenario? I ended up going to Youtube and watching video footage of the aftermath of Hurricane Katrina, which were very difficult and sobering to view. The last book, Light of Dawn, also required extensive research because there’s a strong alternative energy thread to that story.

Q: WHAT ARE THE CHALLENGES OF PLAYING “WHAT IF” WHILE ALSO KEEPING IT GROUNDED IN POSSIBILITY?

Wow. Great question. You know, I actually interviewed people and asked them “What if this happened? How would you survive? How would you balance your responsibility to your family against that to your neighbor and your church?” The result is, I think, a very realistic storyline. I interviewed pastors, pharmacists, grocery store managers, and neighbors. I also took a few polls on my Facebook page. Those had some very interesting results.

People are super worried about losing air conditioning and access to cell phones, less worried about what they would eat in such a situation. I also spent a good amount of time interviewing my mother’s generation, folks in their 80s and 90s, and asking how they survived when a doctor wasn’t near by, or you didn’t have access to a grocery store, or you didn’t have running water and electricity. Their answers convinced me that we could and would survive such things. We’ve lived that way before, and we could again if we were forced to.

Q: YOU WRITE IN A NUMBER OF GENRES—AMISH, ROMANCE, MYSTERIES, NOW SPECULATIVE FICTION—WHICH DO YOU PREFER TO BE KNOWN FOR?

Yikes! I like them all. My fabulous editor, Kim Moore, says that the common denominator in all my books is a “lack of electricity.” The Amish live that way by choice, and my dystopian characters live that way though they’d rather not. You know, I’d like to be known for writing fiction full of grace, fiction that focuses on the grace and mercy of God and how He will see us through all situations. I’ve been fortunate to be able to write in several genres, and I hope to keep doing so.

Q: WHAT DO YOU WANT READERS TO TAKE AWAY AFTER READING YOUR “REMNANT” BOOKS?