Shawn Lamb is the author of multiple titles in Christian fiction ranging from age 8 to adult, as well as an event speaker. Since 2010, Shawn has participated in homeschool conventions, book fairs, and festivals throughout the Southeast, Midwest and Mid-Atlantic regions.

As a former screenwriter for children’s television, author and award-winning writer, she brings 30 years experience dealing with publishing and Hollywood to her speaking engagements.

In this interview, the author shares her experiences world-building, the spiritual themes in the new book, and why storytelling is such a great vehicle for truth.

No spoilers, but how does Trader of Eldar continue what you began in Son of Eldar? (Is this connected with your Allon series—and if so, how?)

Trader of Eldar follows the continuing adventures of Nollen of Far Point, the owner of a remote trading post in The Doane, the southernmost Territory in Eldar. Three years have passed since Son of Eldar, and Nollen has matured into a young man of twenty-three. Still, the Six Territories are coming to grips with change, and Nollen plays a part in that transition.

However, an event in a neighboring country requires Nollen’s particular skills and expertise. The difficulties and challenges will test him like never before. All the fantasy elements are present with talking creatures and such, but just like all my stories, faith and personal mettle is key.

As for the origin of the Eldar saga, it came about after the completion of Allon when my readers asked if I would write more fantasy books. Including “The Guardians of Allon”, “Allon”, and “The King’s Children”, there are sixteen books in that series. In fact, my original intent was a single book for Allon, but my daughter, her friends, and readers wanted more.

Just like Allon, Trader of Eldar is in response to readers wanting another story. Whether Eldar comes close to the number of Allon, has yet to be seen.

Tell us about the world of these books. How did you go about building this world?

For both Allon and Eldar, I use my love of history to world build. However, I wanted to make Eldar distinct from Allon. The Kingdom of Allon is a merger of Israel and Elizabethan England. I chose Elizabethan times because so much fantasy is in the Dark Ages, and I wanted gunpower for cannons yet still incorporate knights.

Allon is divided into 12 provinces, has a Council of Twelve, and immortals and mortals living side-by-side. I use the Guardians (angel-like immortal characters) to highlight spiritual warfare. I began Allon when my daughter was 13 (she’s now 32), and wanted to help young people visualize the Christian’s spiritual battle, which is a concept hard to grasp.

With Eldar, I’m taking a different tact by being more interactive between various people groups. Eldar is divided into Six Territories. In Scripture, “6” is considered the number of man. There are four races; men, Ganel, Ha’tar, and Nefal. Each of these have their own culture, values, and creeds, thus make for tension within the kingdom. I use mythology and varied traditions to create distinctions, as well as conflict.

Of course, there are similarities readers will recognize among the groups, such giants, or elf-like in appearance. Readers – especially young adults – associate with characters who strike a chord, someone they can relate with. As such, I concentrate on character development.

Personal interaction within the story also aids in dealing with issues of life. Weakness, strength, fatal flaws, turning points, success, and failures are important. These aspects cross the demographics within Eldar.

Taken in totality, the most important aspect of storytelling, is to make a solid foundation of the ordinary. This creates as basis, so that when the fantastic is introduced, it is common to that particular world. There is a logic to it based upon parameters.

What are the challenges of creating a fantastical world while still telling stories grounded in biblical truth?

Tolkien and Lewis were inspirational, as they wove history, culture, mythology, and faith in such ways as to create believable worlds and stories. Yet, the most helpful, was Our Lord Himself. Jesus told profound parables without crossing the line into unacceptable and inappropriate.

Since I started writing for my daughter, I pray every time I sit down to compose. I ask for guidance on the spiritual themes and principles to include.

In the forefront of my mind is the thought of what is acceptable to God. Just because I write fiction doesn’t mean spiritual principles go out the window. The Bible makes no distinction between real and make-believe. Stories, parable, and allegories are merely a way to convey Truth. Thus, I strive to keep a clear conscience before God by using Scripture as a governor on what I write.

What spiritual theme or themes can be found in Trader of Eldar?

Perseverance in the face of danger and evil is a main theme. Scripture continually speaks about “perseverance of the Saints”, and how Christians must cling to faith against all odds.

Trust is another issue. There are things Nollen didn’t completely deal with in “Son of Eldar”. He faces tests and situations that cause him to make difficult choices. If the ultimate sacrifice is required, can he face it? Will he falter to the demise of others or step out in faith? Can he serve God, the king, and maintain integrity? Also, included is the principle of “iron sharpening iron” between characters.

The fantasy elements help to propel these aspects, but the foundation of a good story is personal conflict, challenges of faith, and overcoming obstacles. This is what stays with a reader beyond the extraordinary.

What is it about storytelling that makes it such a powerful vehicle for truth?

Jesus’ parables showed that by taking an individual outside of themselves to another viewpoint, it penetrates in a way that self-introspection doesn’t. Storytelling has been a classic method to instill values, pass on traditions, and illustrate concepts since the beginning. When guided by Biblical principles, the impact can be profound.

Words are powerful, and Scripture reminds of how our words can influence people for good or ill. As an author, I must stay true to THE Word, for my words to have the desired effect of good. I can’t control what happens once a story is out, but I can control my intent and clear conscience before God while writing.

That is all any of us can do–is be faithful to God in doing the task He has laid out for us. The outcome is in His hands, and I always pray for the positive. 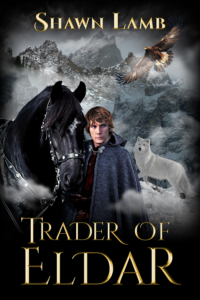 Sir Gunnar is missing, and Lord Sylvan lost his mind. The one thing they have common, a secret mission to secure the fate of Eldar. Concerned by Gunnar’s disappearance, King Axel dispatches Nollen to find him and complete the mission. Joined by an eagle, she-wolf, and a unicorn who lost his horn, Nollen soon realizes that finding Gunnar might just be the easy part. Facing the foreboding Black Mountains and eluding a desperate foe calls for Nollen to rely on his covert skills and faith like never before.