Sandra Fernandez Rhoads’ debut YA novel, Mortal Sight (Enclave), stars 17-year-old Cera Marlowe, who’s tired of her mom endlessly moving them from town to town every time Cera gets a disturbing vision. In our exclusive interview, Sandra tells us a little about Cera and her mom, shares what inspired the story, and explains the hardest part of developing a story that features visions and monsters.

Tell us a little about Mortal Sight. Why do Cera and her mom have to move around so much?

Mortal Sight is about seventeen-year-old Cera Marlowe’s discovery of her true identity and need for community. A transient life is the only thing she has ever known. From the time she was seven, Cera has suffered from untreatable “panic” attacks followed by strange hallucinations. Moving to a new location year-after-year has been the only effective solution in curbing her attacks.

Except now that she’s turning seventeen, Cera has grown weary of her annual uprooting. When an opportunity comes her way that could provide financial means for her and her mother to stay in Wakefield and possibly pay for treatment, Cera jumps at the chance, but doing so unravels long-kept secrets and turns her world upside down.

Tell us more about Cera Marlowe.

Cera just wants to be a normal teenager and has hopes and dreams of developing lasting friendships. She has a strong desire to do what is right and fight for the underdog, but her impulsive nature and inability to follow directions often gets in the way.

Needless to say, she has a lot of growing to do. When she finds herself thrust into a community for the first time, she is forced to learn how to trust others, navigate combative personalities, explore first love, and bounce back from grievous mistakes.

What inspired this story?

I grew up as an outcast and misfit dreamer who never felt like I fit in. (Somewhere in a dark corner of the world, there are pictures of a red-mohawked teen to prove it ). Several years ago, as my daughter fast approached her pre-teen years, I saw her wrestle some of the same questions of identity in community that I struggled with—and honestly, still wrestle.

I started writing her a story about a girl who never felt like she belonged because she was never meant to “fit” into the world; she was set apart and created for something bigger than herself and that somehow this girl could see events in a second realm—a layer over our own world. That thought led me to ask what things of our world point to this second realm and how do things of that world, affect ours?

The idea then evolved into the current concept where artists, or “Awakened,” create and embed messages in classical art and literature and have for over hundreds of centuries. These hidden messages hold secrets to help fight the unseen war.

Mortal Sight is about a teenaged girl and involves visions and monsters. What was the most challenging part of developing your story?

I’d have to say learning how to write contemporary fantasy. There is so much involved in uncovering the laws behind powers and creatures as well as unearthing the mythology and backstory for world building. To understand the world and how it operates I had to map out how everything began, which meant plotting through a historical event in the Renaissance that started it all.

I drafted pages and pages of notes not included in the story. So much of story isn’t on the page but what lies beneath or happened in the past. Another big part of the world building centers around how the events in this story affect the future, which is a new story concept I’m mulling over at the moment.

What spiritual themes are you exploring in Mortal Sight?

The strongest spiritual theme is the battle of good versus evil as highlighted by John Milton’s epic poem Paradise Lost that I weave throughout the story. I explore the struggle of light and shadow in each of us, and how we face a daily choice about who we’re going to be and what we believe.

One of the biggest themes of Mortal Sight includes identity in community, and how everyone is independently gifted in unique ways but it is our responsibility to use these gifts in community and for the benefit of the greater good; not in isolation and for our own well-being. Community, and knowing what part we play in life’s narrative, is important for our growth as well as our ability to fight our daily battles, whether seen or unseen. 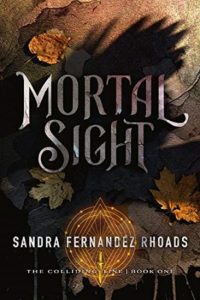