Kristen Young has published a number of books, beginning with The Survival Guide devotions for teens. What if? Dealing with Doubt is a book for young people struggling with doubts about God, Jesus, or faith.

In more recent years, she’s been writing fiction. Apprentice (Enclave Escape) is the first book in the Collective Underground trilogy.

In this exclusive interview, the author talks about the book’s main character, the inspiration behind the story, and the spiritual themes woven through Apprentice.

Who is Apprentice Flick? 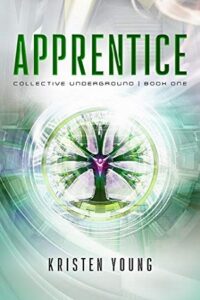 Apprentice Flick is a girl with the kind of ability I would love to have: she has a perfect memory. But that makes her a bit of a misfit in her Nursery Dorm. She is called “Memory Freak” by her classmates, and treated with suspicion. So she really wants to escape her situation and move to Elite Academy, where she thinks she’ll be more welcome. But some troubling things start to happen to her, and pretty soon she’s got a lot more to worry about.

What is the Love Collective?

In the fictional world in which this story is set, the Love Collective desires to create a well-ordered society, and so it is absolutely essential in their eyes to weed out the Haters. They use technology to help them achieve this.

What inspired your story in Apprentice?

A couple of things. I loved Brave New World, The Hunger Games trilogy and other dystopian fiction, so I wanted to try and write one for myself.

One of the things I’ve noticed about totalitarian governments is the way they control language. Not just in their propaganda, but in the definitions they use. Nazi Germany, for example, didn’t just proclaim to the world that they were going to kill millions of Jewish people and other population groups. They gave it a euphemistic name and built a carefully controlled narrative around the supremacy of one race over another.

Language was a huge weapon in this situation. It hid the truth. It told a story that brought large swathes of the nation onboard with their program, and it guided the news that was being shared so that large numbers of people could claim ignorance to what was happening.

The other, lesser inspiration was the fact that I keep forgetting things, and so it was very tempting to write a main character who always remembered everything…

How does this volume fit into the larger Collective Underground series?

This is the introduction to Apprentice Flick’s life. Without sharing spoilers, she’s at the beginning of a journey that’s going to show her a whole new world, while revealing some things about her current life that are a little more sinister than she ever realized.

What spiritual themes are you exploring in this story, and what would you like readers to take away after having read Apprentice? 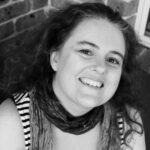 I’m exploring lots of themes in this trilogy. The first book raises a few big questions: what is love? What does it mean to love someone? What is friendship? What is redemption? Where does our identity come from?

Flick is at the beginning of her journey of awakening in this book, so there are more spiritual themes to follow in later books, too. I’d love readers to come away from Apprentice with a deep desire to keep following Flick’s journey.