Uhrichsville, OH (September 30, 2022)
Transplanted to North Dakota after more than two decades in Charleston, South Carolina, Historical Romance author Shannon McNear loves losing herself in local history. She’s a military wife, mom of eight, mother-in-law of three, grammie of two, and a member of ACFW and RWA. Her first novella, Defending Truth in A Pioneer Christmas Collection, was a 2014 RITA finalist. When she’s not sewing, researching, or leaking story from her fingertips, she enjoys being outdoors, basking in the beauty of the northern prairies. Shannon has released the second book in her Daughters of the Lost Colony Series. Mary tells the riveting and inspiring tale of a native girl and an English boy and the push and pull of their two very different world.

Book Summary:
Worlds Collide Along the Shores of the Outer Banks

Immerse yourself in the “what if” questions related to the Lost Colony of Roanoke. What if an English boy and a native girl met in the wilderness? The push-and-pull between two very different worlds begins as one seeks simple friendship and the other struggles to trust. And can it—dare they—allow it to be more?

Sparks fly between Mushaniq, free-spirited daughter of Manteo, and Georgie Howe, whose father was brutally murdered by undiscovered native warriors before they’d been on Roanoac Island a full week. As Georgie struggles to make sense of his life and to accept that not all they call “savage” are guilty of his father’s death, Mushaniq grapples with her own questions about who Manteo has become. As tentative friendship becomes more, forged in the fire of calamity and attack upon their community, both must decide whether the One True God is indeed who He claims to be and whether He is worthy of their trust. 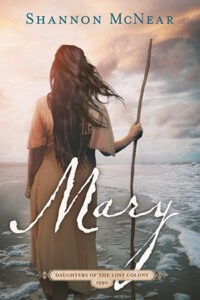