Stefanie Lozinski lives in Ontario, Canada, with her husband, two young children, two cats, and a whole lot of books. When she isn’t homeschooling her little ones, you’ll find her on a long walk, drinking coffee, praying, or working on her next novel.

In this interview, Stefanie talks with us about her latest novel, Majesty, which is the second book in her Storm & Spire Series.

FF: What inspired the story in your book?
The Storm & Spire Series was really a way for me to explore various themes that had come up for me when thinking about my faith. I also drew a lot of information from the Bible itself, especially the Old Testament – though it’s not always conscious! Sometimes my characters really surprise me.

FF: What can you tell us about the main characters in your book?
My series centers on a young man called Wes Cervos, who has been chosen since birth to be the Envoy. He is tasked with bringing the material sacrifices of the people to the Dracodei, or the dragon gods, and it’s not a role that he delights in to put it mildly.

His life is turned upside down by our second main character, Celesyria, who is a bookish, misfit dragon who comes to learn that what they have all been told about the Dracodei may not be the truth.

Joined by Alder (a former elite soldier for an enemy king) and Kessara (a princess whose marriage will decide the fate of the Four Kingdoms), Wes is pulled into an epic adventure that changes his life, his faith, and the world.

FF: Which character surprised you the most?
Definitely Alder. He becomes a point-of-view character in this installment, book two, but I never planned him at all. He was just supposed to be a bit of muscle when I needed him, but he leaped off the page. He has a sort of arrogant faith at first, so he gets to learn lessons that I think a lot of us Christian converts have to go through at first.

FF: Why do you think storytelling is such a powerful way to share truth?
I love to think about the fact that Jesus Christ Himself used parables to teach and to illustrate his teachings to others! Sometimes there are lessons that we need to learn not just intellectually, but at a much deeper level. Stories bring life to characters, and when those characters learn the truth, it can be so much more powerful than hearing it in a more direct way.

FF: What can readers expect from the rest of this series?
Hopefully, Wes will free the world from the rule of these tyrannical false gods! 😉 But it’s going to be quite the adventure until he gets there…

FF: What can you tell us about your next book?
In Maelstrom, we get to delve deeper into a couple of romantic subplots. There’s definitely a theme of forbidden love, and the conflict we have as Christians between doing what we feel vs. doing our duty. But don’t worry, there’s plenty of action, too–including of the ancient sea monster variety.

FF: How do you get into the right frame of mind to write for your genre/audience?
I do my best writing early in the morning. I get up around 415, and I like to be at my desk (kitchen table/homeschool central!) around 5 so I can get a couple of hours to write before my children wake up. I really like my routine! Before I write, I say my morning prayers, and I ask God for diligence and for wisdom. I also try to read the Bible daily, even if it’s only a couple of chapters at a time. I find that when I’m connected to God, the spiritual themes emerge very naturally in my stories.

FF: What do you want readers to take away after reading your book?
I think that there’s a tendency in our culture to make Christianity this really weak, kind of wimpy sort of faith. In my stories, I want to emphasize that our faith requires taking up our crosses. My characters go through some very real challenges, and they have to keep doing their best to obey God, even when they don’t understand why. Of course, I also want readers to know that God always gives us the grace to fulfill His will, even here in our fallen world.

FF: What are the biggest challenges for you as an author writing in your specific genre?
Definitely keeping everything straight in my head! Epic fantasy tends to have a lot of moving parts, and my Storm & Spire series is no exception. Even though I plan and outline heavily, there are still moments where I have to dig through my prior installments to figure out what’s going on.

FF: What authors or books have inspired you as an author?
Tolkien is an obvious one! I also love G.K. Chesterton, though I haven’t actually read any of his fiction yet—I’ve used his quotes at the beginning of each of my books. He has such a unique and brilliant way of looking at the world. Patrick W. Carr’s the Sword and the Staff Series was a big inspiration behind my series, and I can’t wait to read his other books.

FF: How has your faith or world view impacted the way you tell stories?
Finding Christ changed everything about me, including the way that I write! It’s not something I can turn off—my faith is my identity. I really strive to write books that glorify good and call out evil. My characters are far from perfect, but it’s important to me as I’m writing to portray a world where Truth exists and matters.

Book Summary:
The sacrifices to the gods have ceased.

A wicked king thirsts for power.

A forbidden love threatens everything.

Raised from birth to fulfill the duties of his role as Envoy, Wes Cervos had always known where his place was in the Four Kingdoms. But ever since meeting his best friend—a dragon called Celesyria—everything has changed.

After escaping the prison where he’d been held on charges of blasphemy, Wes finds himself facing new challenges. The Codex Veritatis is still missing. Violent crime has never been more of a threat. Old alliances are wearing thin. And worst of all, the elves are venturing out of Nox.

With Wes refusing to offer sacrifices to the Dracodei, the people fear that the remaining dragon Guardians will no longer protect them. King Kylan Ursa seeks to raise a force strong enough to keep the rule of Kaveryth in the hands of men, but can he be trusted to wield such power?

Change is in the air, but one thing is certain: the rule of the High One is not going to be restored without a fight.

Storm & Spire is a Christian fantasy series, perfect for readers who enjoy fantastical creatures, political intrigue, and a touch of clean romance. 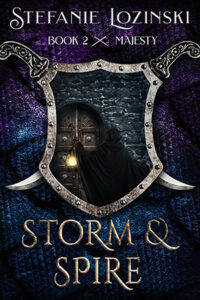