The latest pulse-pounding suspense title from Nancy Mehl is Blind Betrayal (Bethany House), the finale in her Defenders of Justice series. When U.S. Marshal Casey Sloane is tasked with escorting a grand jury witness, she and two other marshals—including a man from her past—will do whatever it takes to keep their witness alive. In this interview, Nancy shares how Blind Betrayal breaks new territory for her as an author, what makes her main character special, and why her books often carry strong spiritual themes…

What inspired the plot for Blind Betrayal?

In trying to come up with something a little different, I made the decision to blow something up! LOL! Why not send a bomber into the U.S. Marshals’ Office? I also decided to include a terrorist and some international intrigue, something I’d never done before. I had fun stepping into new territory. I hope my readers will feel the same way.

Tell us about your main character, Casey Sloan. What makes her special?

Casey is a dedicated Deputy U.S. Marshal. Her job is everything to her. But as much as she desires to keep out anything that distracts her from her main goal, she has to deal with the reality that she’s human. Even though she’s tried to move on, a past case continues to haunt her.

Because she allowed a witness to get away, people died as a result, and she can’t forgive herself. She even delays getting out of an abusive situation because she feels a subconscious need to be punished.

In the story, another Deputy Marshal, E.J. Queen, will try to convince her that it isn’t God’s will for her to carry guilt that is crippling her and keeping her from finding love.

What can you tell us about Queen?

E.J. is an interesting character. He and his family spent years in the U.K. before moving back to America. His parents are very wealthy and can’t understand why their son felt the need to become a part of law enforcement. Although E.J. loves his parents, he rejects their aristocratic lifestyle.

E.J. is tall, on the thin side, and doesn’t look like anyone’s idea of a Deputy U.S. Marshal. But looks are deceiving. He’s tough, and when Casey’s life is threatened, he’s ready to give his own life to keep her safe.

What do you hope readers will take away from Blind Betrayal? 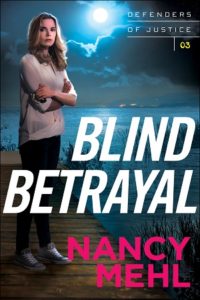 I hope they enjoy the fast-paced story. I also hope that if they carry unresolved guilt, they’ll realize God wants us to release it to Him. Jesus died to set us free from sin and guilt. Condemnation is crippling and can affect our lives in many negative ways.

Why do you think story is such a powerful way to communicate truth?

Well, it worked very well for Jesus, didn’t it? Christ told parables –fictional stories with spiritual messages. I believe there can be a powerful anointing on our writing. I pray over each book and ask God to use it to touch people.

I want to give them a great story, but I also want to leave them with something even more important. The message that God loves them and has a plan for their lives.

Many of your books have strong spiritual themes. Why is that?

When I started writing fiction, my idea was to write for the secular crowd, hoping to impact them for Christ through my writing. But when I asked God what He wanted, He led me to Christian publishing. I began to understand that He wanted me to touch His people through the gift He’d given me.

Jesus admonished Peter several times to “feed My sheep.” God’s heart is to see His people healed and whole. To learn how to trust Him for everything they need. Many times, He uses inspirational fiction to bring words of encouragement and healing to readers.

Jesus did this when he told parables—fictional stories created to prove a spiritual point. I always include spiritual themes in my books because I believe it’s what I’m called to do. It’s the reason I’m a writer. I’ve received many emails and letters from people who were touched by something I’ve written.

I don’t take credit for that. I always ask God to show me what He wants to say before I write a book, and I believe He answers those prayers. But I certainly do enjoy hearing the results! The reports bless me.

I once got a letter from a teenager who had turned away from God, but because of something I’d written, she decided to rededicate her life to Christ. There is nothing more important to me than this. If I couldn’t minister through my writing, I wouldn’t want to write at all.

However, I do also believe it’s my job to write an entertaining and suspenseful story. I work hard to do that, as well.