Lynette Eason is the USA Today bestselling author of Life Flight and Crossfire, as well as the Danger Never Sleeps, Blue Justice, Women of Justice, Deadly Reunions, Hidden Identity, and the Elite Guardians Series. She is the winner of three ACFW Carol Awards, the Selah Award, and the Inspirational Reader’s Choice Award, among others.

In this interview, Lynette talks about book number two in her Extreme Measures Series, Crossfire.

FF: Crossfire is the second book in your Extreme Measures Series. What is the connecting element for all the books in this series?
The books are all connected by the four female protagonists. They met as teenagers in juvie.

FF: Your female protagonist, Julianna Jones, is a hostage negotiator. What event from Julianna’s past influenced her desire to work in this field?
Julianna survived a school shooting where one of her best friends was killed. She couldn’t talk the shooter down and vowed to make sure she could help anyone ever caught in the same situation.

FF: Clay Fox, your male protagonist, is working as a high school resource officer. But his skill set is far more in depth. Can you please explain his background and how that comes into play in Crossfire?
Clay used to be a sniper in the Army. He’s was Special Forces, but after a betrayal that resulted in the death of an innocent man, he found himself unable to pull the trigger. He left the Army to take a position as a school resource officer while he figures out what the future holds for him.

FF: What do you hope readers will gain from reading Crossfire?
I hope they will be thoroughly entertained and that the characters will resonate in some way with them.

FF: What do you love most about writing novels in the romantic suspense genre?
I love that there’s always a happy ending. I love that the characters work hard to overcome adversity, learn something about themselves, fight for justice, and fall in love. In other words, I can’t pick just one thing that I love about the genre!

FF: What are you working on next?
I’m currently working on the third book in the Extreme Measure Series.

Book Summary:
She’s never lost a hostage. Surely she can manage to take care of her sister.

FBI special agent Julianna Jameson is a top-notch negotiator, but when her much younger sister, Dottie, needs a place to live while she finishes high school, Julianna’s skills will be put to the test.

Former sniper Clay Fox left the army after a tragic incident that he can’t get past. Until he can figure out what to do with the rest of his life, he’s working as a resource officer at a school. Dottie’s school.

When Julianna is called in to negotiate a courtroom hostage situation involving Clay’s sister, he’s impressed–and, if he’s honest, a bit intimidated–by the calm, capable woman with the dark hair and blue eyes, and invites her to speak at the school.

But as the anniversary of a school shooting from Julianna’s past approaches, it becomes clear that her perfect record is about to be tested and that Dottie is at risk. If Julianna and Clay can’t figure out who’s behind the attacks, more innocent people will die–and Dottie is next in line. 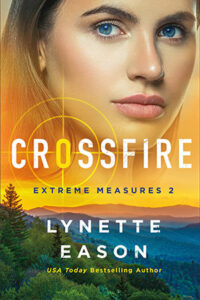