Janice Cantore is a retired Long Beach police officer who now writes suspense novels to keep readers engrossed and leave them inspired. Her twenty-two years of experience on the force lend authenticity to her stories. She has penned thirteen novels: the Line of Duty Series, the Cold Case Justice Series, the Pacific Coast Justice Series, Critical Pursuit, Visible Threat, and Breach of Honor.

In this interview, Janice talks with us about her latest suspense novel, Code of Courage.

FF: How do you expect Code of Courage to resonate with your readers? What are you most excited for your readers to experience through reading this novel?
This story is pulled from today’s headlines. Many people have probably experienced anti-police protests in their cities, or they’ve seen them on TV. I hope to show what it looks like through the eyes of the uniformed officers on the front lines.

FF: Tell us about your ideal reader. Who did you write Code of Courage for?
Anyone who enjoys suspense novels with police officers as the main characters.

FF: Code of Courage delves into serious, complicated issues like protests, police-involved shootings, varied public opinions about law enforcement personnel, and mental health challenges faced by first responders. Can you share some of the real-life experience and research that went into crafting the plot of this novel?
I was in uniform during the Rodney King riots, so I experienced firsthand what trying to control a riot feels like. It’s like trying to contain water in a sieve, only more dangerous. I remember being in a group of five or six officers facing off at least three hundred angry people. Bottles were thrown, violence threatened, yet back then the mob’s objective for the most part was simply looting. They wanted to get past us to the stores and businesses. The riots I watched recently were much scarier. The crowds wanted to hurt officers and destroy property. It made the officers’ jobs so much harder and more dangerous. During the King riots, we worked 12-hours shifts and it was hard on everyone. I was physically and mentally exhausted. When I saw the recent riots, my heart went out to all those officers. It was like what I went through, on steroids.

FF: What lessons does Code of Courage teach about justice, community, and accountability within government organizations?
Accountability is important in all walks of life—politics, policing, teaching, journalism, etc. When the public perceives that no one is held accountable in a particular institution, then they lose faith and trust in that institution.

The villain was the hardest for me. I don’t understand people who want to defund the police. It’s easy for me to say, “Only criminals want to see police defunded,” but I realize the issue is more complex than that.

FF: Does faith play a role in the story?
Yes. Danni’s faith is tested by what happens to her. It causes a reevaluation: What is most important in life? What provides the drive to keep going, even when things are difficult and painful? For me it’s faith, and the importance of God and faith will always play a role in my stories. Also, Gabe sees the importance of faith in Danni’s life. It causes him to evaluate his own faith, or lack thereof.

FF: What is one thing you wish more people understood about working in law enforcement?
Police officers are human beings. None of them can ever be perfect. By and large, most people become officers because they want to help, they want a safe community. And for every incident that goes wrong and is widely covered in the news, there are thousands that go right that most people never hear about.

FF: Can you tell us a bit about any upcoming projects you’re working on, now that you’re releasing Code of Courage?
Yes, I’m working on another novel, with two officers who have suffered trauma in their working lives. Jodie and Sam have been shattered in different ways, and they face different faith battles. When Jodie’s life is threatened, Sam steps in and saves her. But that act endangers his life as well, and they are both thrown into the race to find a killer before he strikes again.

Book Summary:
Detective Danni Grace has never met a police officer who wants to face a scenario where pulling the trigger on another person is the only option. When the worst does occur and there’s a police-involved shooting, it leads to riots and calls to disband the entire police force in La Rosa, Danni’s hometown.

After fifteen years on the force, Danni has had enough. Injured in the line of duty when a protester throws a chunk of concrete at her and shaken by the vitriol being shown to the police, Danni realizes for the first time that she’s lost her passion for the job.

While she’s on a leave of absence, though, a community activist in La Rosa is shot and a fellow officer is blamed for his murder. Taking on this case means stepping back into a job Danni’s not sure she can do anymore . . . and working closely with her ex-husband, Gabriel Fox, an investigator for the city prosecutor’s office. Danni will need to tap into her code of courage to uncover the truth, prevent another injustice, and uphold her oath to serve and protect. 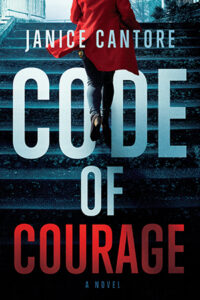 Buy Code of Courage from the FF Store HERE!