Best-selling Christian fiction romantic suspense author Colleen Coble‘s novels have won or finaled in awards ranging from the Best Books of Indiana, ACFW Book of the Year, RWA’s RITA, the Holt Medallion, the Daphne du Maurier, National Readers’ Choice, and the Booksellers Best. She has nearly 2 million books in print and writes romantic mysteries because she loves to see justice prevail. She lives with her husband Dave in Indiana.

In this interview, Colleen talks about the recently released book number three in her Pelican Harbor Series, Three Missing Days.

FF: Readers love the fast pace of the previous novels in the series. How do you get the pacing just right to keep readers on the edge of their seats, but still developing the story and characters?
You have to make sure to give the reader a chance to breathe—but not too big of a gap. I try to make sure the reader is worried about multiple layers so even as they are relaxing from the cessation of danger for a few minutes, they’re intrigued by another problem the characters are dealing with. I also like to zero in on character as my protagonist deals with the blows that come her way. How she handles things are part of the world building and show who she really is inside.

FF: How do you create the right balance of romance and suspense in your novels? What does a romance thread add to a suspenseful story?
As a reader, I pick up a book to immerse myself in another world—to understand the world and people a little better than I did before I read the last page. We are made for relationship. A romance adds that layer of relationship we all crave. I try to add more than just romance though—I try to show how real love is more than physical attraction. It’s about finding another person who really “gets” us, who fills a hole in our lives that we didn’t know was missing. In a suspenseful story, the romance gives the reader space to breathe even as they worry about the outcome of the relationship. Relationship transcends danger for more readers. As a suspense reader, I love the action and danger, but the relationship adds to the urgency of the escape from death.

FF: How did you research/create the setting for the Pelican Harbor Series, Alabama?
I always have to visit the location because you discover things while there you never would notice by reading travel books. For example, I knew nothing about Bamahenge before my first visit. I didn’t know about the dinosaur statues nearby either. You have to taste shrimp gumbo to really appreciate it, and there is nothing like watching the pelicans swoop over the water and snatch up fish. I wouldn’t have realized oil and gas platforms dot the landscape offshore without seeing them from the beach. It was during our first visit that a young friend working on a shrimp boat told me about the things they haul up in the nets. That was the catalyst for the entire series. I always start with setting when crafting a new book. I know that sounds backwards, but what is important to people living in the area helps so much with character and plot!

Chief of Police Jane Hardy plunges into the investigation of a house fire that claimed the life of a local woman as well as one of the firefighters. It’s clear the woman was murdered. But why? The unraveling of Jane’s personal life only makes the answers in the case more difficult to find.

Then Jane’s fifteen-year-old son is accused of a horrific crime, and she has to decide whether or not she can trust her ex, Reid, in the attempt to prove Will’s innocence—and whether she can trust Reid with her heart.

Three days of Jane’s past are missing from her memory, and that’s not all that has been stolen from her. As she works to find the woman’s murdered and clear her son’s name, finding out what happened in those three days could change everything.

It all started with one little lie. But the gripping truth is finally coming out. 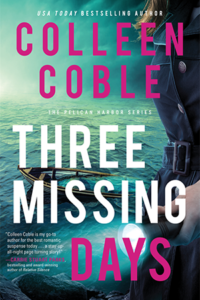