Shelley Shepard Gray is the New York Times and USA Today bestselling author of numerous romantic fiction series and mystery novels, including the Seasons of Sugarcreek Series, the Sisters of the Heart Series, the Families of Honor Series, and others. She is the recipient of the RT Book Reviews Reviewers’ Choice Award. She has written more than eighty novels, translated into multiple languages.

In this interview, Shelley talks about her latest book, Edgewater Road, which is the first book in her new series, Rumors in Ross County Series.

FF: Your new book Edgewater Road kicks off a new series, tell us about the book, and introduce us to the series.
The Rumors in Ross County Series takes place in central Ohio, and it is essentially a contemporary romantic series with both a touch of suspense with a light inspirational slant. All three of the books feature ex-cons who are struggling with the mistakes they made in their pasts as well as the faith they discovered while in prison. Edgewater Road features an introverted woman moving into her grandmother’s house, the secrets she discovers there, and her relationship with Lincoln. Lincoln lives next door and essentially runs a half-way house for ex-cons. It’s romantic, a little edgy, and sweet.

FF: You open a book with a letter to your readers, why was it important that you added this?
I love that my publisher allows me to write these introductory letters to readers. I happen to love reading them in books that I pick up. I also wanted to share how personal this novel is to me—I wrote most of it during our quarantine in 2020. I think that uncertainty surrounding all of us at that time played a role in the novel. I also wanted my readers to be reassured that my mixed-up, imperfect characters also had a strong faith.

FF: You have written many books over the course of your successful career, talk a little about your process and where the ideas come from.
I think I’m always thinking of new story lines to write. Sometimes I’ll see an article on the news that will inspire a book. For EDGEWATER ROAD, I was at a ladies luncheon and the main speaker was a woman who talked about her work in both prison ministry as well as her efforts to help ex-cons adjust to life after prison. When she spoke about how faith can free a person from a prison of their own making-I knew I had a book.

FF: Edgewater Road is set in a charming town, with so many lovely people, but it has secrets too. What made you decide to add some mystery to this book?
While I love writing romances and exploring relationships, I love reading mysteries. It’s always a little tempting for me to add a mystery or suspense element to a novel. Not only does it add another layer of conflict, I think it helps with the pacing to the novel.

For Edgewater Road, I thought a bit of mystery helped the characters’ storylines, since the root of the book is that everyone isn’t what he or she seems to be at first glance.

FF: We tend to see things at face value, but Jennifer really must take a deeper look at Lincoln and his friends. Is that something that readers will take away from Edgewater Road?
I think a lot of people form impressions about whomever they live near and form split-second impressions about them. Jennifer, being a single woman, is at first understandably worried when she realizes she lives next to a half-way house. However, she comes to trust many of the men more than her family or her friends. I liked to think it was because her new neighbors forced her to come out of her shell. Writing this book made me want to be a little more open and trusting with people. I’m hoping that some of my readers will want to do that, too.

FF: Edgewater Road is the first book in the series, can you give us a sneak peek at the next book?
The next book in the series is called Sycamore Circle, and it will be published in 2023. The hero in the novel is Samuel ‘Bo’ Beauman, and he is a secondary character in Edgewater Road. The heroine is Joy. She’s divorced, has a nine-year-old little girl, and is a tutor and literacy volunteer. Joy also happens to have a stalker. When things take a bad turn for her, everyone is a suspect-her ex-husband, the ex-cons she tutors, the homeless man she’s teaching to read, and Bo, her new boyfriend. I’m really excited about this one!

Book Summary:
When Jennifer Smiley’s grandmother, Ginny, leaves her an old farmhouse on Edgewater Road in seemingly quiet Ross County, Ohio, Jennifer can’t pass up the opportunity for a new beginning. Almost immediately she meets a group of men who generously help her move in. When she realizes that they work for Lincoln Bennett, her next-door neighbor, she’s intrigued. Lincoln is gorgeous and has dark, lapis-blue eyes she could get lost in . . . but he doesn’t seem all that friendly. She’s torn between getting to know him and sticking with the solitude she knows so well. Maybe she could let down some of those walls she’s built around her emotions?

Lincoln Bennett likes to keep his head down and get his work done. He’s been to prison and he knows that a lot of folks don’t take kindly to a man with that kind of history. Plus, he’s busy helping other ex-cons get back on their feet. But when he meets Jennifer, he can’t help but feel an instant attraction. Will she be able to look past his unsavory history? Will she be able to accept the men he’s working so hard to help?

While Jennifer gets to know Lincoln and his friends, she also begins to unravel her grandmother’s story, putting together the pieces from scraps of memories and things she finds in her new home. She soon discovers that Ginny Smiley harbored some dark secrets on Edgewater Road — and that those secrets include both Lincoln and her own absent father. Is learning the truth worth the heartache it could bring?

As the weeks pass and she and Lincoln become closer, Jennifer learns there is a lot to uncover in Ross County—wonderful friendships, darling towns … and more than one secret that might be better left buried. 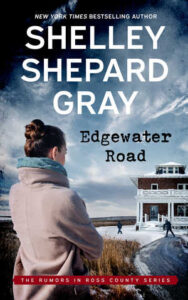