Home
Features
For almost a decade, actress Roma Downey played an angel on the popular TV series “Touched by an Angel.” Now, she returns to the TV screen with a new animated children’s series.

After playing the role of an angel on the popular TV series “Touched by an Angel” for almost a decade, Roma Downey feels a great responsibility as she chooses what projects to work on. “I’ve been privileged to bring the message of God’s love to millions of Americans,” she says, looking back at her time on the show, which ran from 1994-2003 on CBS. “As a mother, I’ve been waiting for an opportunity to bring that message to children.”

With Little Angels, a new animated DVD series for preschoolers, that opportunity finally came. But this time, she’s not playing the role of an angel, but of executive producer. 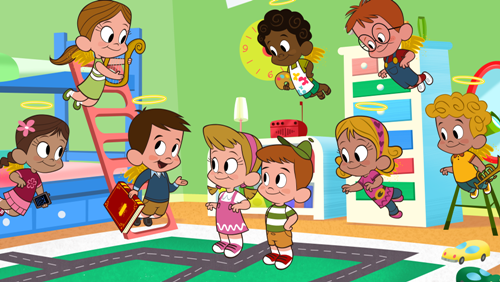 “There’s nothing quite like it,” she says. “I know, raising kids myself, there were times as a mom I was so glad to put a video or DVD on. [Little Angels] is something I wish had been available when my kids were young.”

Little Angels follows twins Alex and Zoe, typical four-year-olds who face typical challenges in learning and faith. But what’s not typical is what happens in their nursery after going to bed: “The beauty of the concept is that the little angels live in the mural on the ceiling of the nursery,” she says. “When the parents are not present, the angels come to life.”

The angels who live in the ceiling mural help Alex and Zoe with both character-building life skills and practical educational learning. For example, one of the DVDs features Hayley, “a crocodile hunter character who speaks with an Australian accent,” Downey explains, dropping into an Aussie accent herself. “She teaches them not only the names of animals, but also about treating animals kindly. It also deals with David and Goliath and conquering fear.”

In that story, a dog scares Zoe. “The angels teach them ways to deal with that situation.”

“They all have different personalities,” Downey says of the eight little angels. “Gabriel is already a favorite with the children’s audiences we’ve shown it to.”

Another angel, Uriel, is artistic and speaks in Dr. Suess-like rhymes. He also paints, and his paintings “allow us the ability to travel into the canvas so the children can be with Jonah in the belly of the whale, or Noah and his ark, or the ten sick men Jesus healed. We are able to travel into Bible history.”

The series uses songs and repetition to teach lessons about themes such as perseverance, gratitude and kindness. Each DVD features four short story segments, written by Adventures in Odyssey co-creator and writer Phil Lollar.

While her own children, now grown, are not part of the Little Angels audience, they are still part of Little Angels. “My daughter Reilly is a real fine singer and my son James plays guitar.” Both of them helped record the music. “They got experience and I got a couple of free performances!”

And while Roma Downey herself does not play a “little angel,” her voice will still be heard. “I’m playing the role of the mother. We never see her face and she’s not in every episode.”

Downey’s face, however, will be seen on each DVD in an extra feature for parents in which she talks about issues parents face and parenting tips.

The first two DVDs, Little Angels: ABCs and Little Angels: Animals, are available exclusively in the Christian market until spring. A sing-along CD, book and mobile app will follow soon, along with 15 more DVDs over the next five years.

Even though Downey has been involved in many film and television projects over the years, she is still very excited to see Little Angels finally be released, after all those years. “I’ve put a lot of my own heart into it,” she says. “It’s something I believe in and it’s something I’m very proud of.”

This article originally appeared in the January/February 2012 issue of FamilyFiction digital magazine.