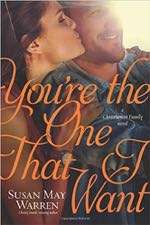 You’re the One that I Want by Susan May Warren is the sixth and final book in the Christiansen Family series, a contemporary drama and romance focused on the family of its namesake from Minnesota lake country. It’s a dramatic conclusion that draws together conflicts introduced in former books. While it’s not necessary to read the previous books to have an understanding of the history of these characters, it is recommended for a richer experience of the story arc.

The entire series has hinted at the tension between Owen Christiansen and the rest of his family, particularly with his brother, Casper. This story chronicles a parallel with the parable of the prodigal son and explores the emotions and jealously the other brother experienced. While Owen’s personal mistakes threaten Casper’s future happiness, Casper’s own choices propel him into a different conflict with the law.

Owen Christiansen finds himself adrift both emotionally and physically after a stint on a crabbing boat. While he hoped to advance his work relationship with the no-nonsense captain’s daughter, “Scotty” McFlynn, to something of a more personal and romantic nature, his rash decisions come back to haunt him when his brother Casper shows up to wrangle him home. Complicating the situation further, Scotty’s new position with the Anchorage police force inserts her in the middle of the brothers when Casper’s link to a crime is revealed.

While Owen had already contemplated the humbling act of returning home after an injury ended his NHL career, he never anticipated the circumstances that would bring him back to his family’s door. Nor did he expect a police escort in the form of the woman he’s come to care for. But proving himself to Scotty becomes even more of a challenge as her emotional wall and jaded past come to light. Perhaps the refuge of the Christiansen family is just what Scotty needs to heal and learn the power of love.

Susan has a knack for pushing a character to his or her limits, be it physically or emotionally, to test their character and response. And readers experience the ride with them. This story opens with the cold of the Bering Sea; book 5, with Amelia and the intrigue of foreign lands; book 4, with Casper and the adventure of treasure hunting. This story could have been a predictable, brown-paper-package type conclusion to the series, but it goes far beyond the expected in with suspense and surprises.

The family camaraderie of this series is present once again. In particular, the banter between the brothers, Owen and Casper, is unforgettable with scenes of humor and a bluntness reserved for family. They know just which buttons to push and how to get beneath each other’s skin, infuriating one another and spurring one another to consider their present situations with unsolicited advice.

This story conveys the importance of not giving up. Not giving up on faith, on a pursuit of purpose, on God’s plan and presence, or on family and its strength. It takes the prodigal son returning to a new level. It shows the viewpoints of both brothers, the bitterness on one side and repentance on the other, with a reconciliation found in grace and the support of family. The contemporary example of Owen makes the story of the prodigal more relatable by showing how all have fallen short of God’s standards, and many run from grace while God is waiting with open arms.

Courtney Clark is a small-town girl from Arkansas who loves Jesus, reading, photography, cooking, crocheting, and hot tea (in any combination). When she’s not doing any of those things, she’s working at her family’s restaurant or teaching at the local community college. Catch up with her at her blog, thegreenmockingbird.wordpress.com, or follow her on twitter @CameraCourt.