In a world of political accusations and threats of war, what does the public need to know, and what is better left unsaid for our own protection? In his latest legal thriller, Rule of Law (Tyndale House), award-winning author and attorney Randy Singer weaves a gripping page-turner that explores the inner workings of the White House, the CIA and the State Department in dealings with foreign governments. Drawing from one of his own recent cases, Singer gives readers a glimpse of what is really going on behind the headlines of today’s international events. In this interview, the author shares what inspired Rule of Law, the challenges of writing a political thriller in today’s political climate, and how his faith impacts his storytelling… 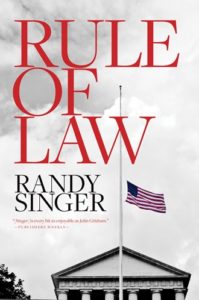 Rule of Law is a political thriller where the defendant is the president of the United States. What inspired you to go in this direction?
Two remarkable people inspired me to write Rule of Law. They are both clients of my law practice.

Rule of Law begins with a SEAL Team raid of a prison camp in Yemen where the Houthi rebels are housing two important political prisoners.

Mark McAlister was working for the United Nations on October 20, 2015, in Yemen when he was captured by the Houthi rebels (who believed he was working for the CIA). For the next six months Mark was confined to a small, windowless cell where he was abused and interrogated. Through it all, he never renounced his faith. On the contrary, he boldly told his captors that he was a follower of Jesus. After they took his Bible, Mark would pace his small cell, praying and reminding himself of the miracles of Jesus.

Six months into his captivity, Mark was miraculously released by his Houthi captors. By then, he had won their respect and developed a relationship with them. I had Mark share his testimony with my church which can be accessed, along with the message I preached that day, here: Lord of the Nations

The second person who inspired this book was Dana Wise. She is the widow of a former Navy SEAL who attended the church I pastor and who was killed by a terrorist in Afghanistan. Dana’s grace and class in the midst of tragedy have been an incredible testimony to so many people. The main character in this book is a young female lawyer who is on a mission to avenge the death of her boyfriend, a Navy SEAL killed in the line of duty. The strength and class of Dana served as a great model for my protagonist. Dana shared her story on Memorial Day at our church, which can be seen, along with my message, here: Greater Love.

In Rule of Law, I want readers to experience triumph in the midst of tragedy, and justice rising out of pain.