Jody Hedlund is a best-selling and award-winning author who loves fairy-tales and happily-ever-afters. Her latest release, For Love & Honor (Zondervan) is a historical, Medieval adventure for teens and young adults. Jody answered our top questions about this exciting new novel.

Can you describe your plot in one sentence?

Under the threat of imminent attack from neighboring lords seeking payment of debt, Sir Bennet struggles to accept the prospect of a marriage of convenience to the wealthy Lady Sabine to increase his family’s coffers all the while not realizing she harbors a secret that could bring about not only the demise of his household but of his heart.

Is this novel part of a series? If so, what are some overarching themes in the series? 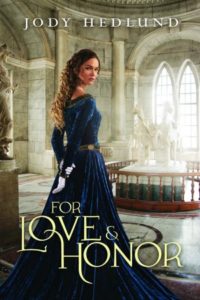 For Love & Honor is the third book in the series that started with An Uncertain Choice. In An Uncertain Choice, readers were introduced to three of the bravest and strongest knights in all the kingdom. Two of the knights, Sir Collin and Sir Derrick, have already found their happily-ever-afters. In this third book, Sir Bennet will finally get his happy ending too. While various characters from previous books show up, readers don’t have to have read the first two books in the series to understand and enjoy this third installment.

Even though the books can be read as standalones, themes of chivalry weave throughout the entire series and challenge readers to take a closer look at what kinds of things go into making a good dating relationship—shared values, friendship, selflessness, sacrifice, and honor (among many).

Ultimately, it’s my hope that this series can spur young ladies to think about and discuss how to have healthy, God-honoring relationships. Free companion study guides are available on my website (and questions are also available in the backs of the books) to help facilitate further discussion about dating and relationships.

Who is your favorite character in the book?

I really loved creating Sabine’s grandmother, Lady Sherborne. She’s a prickly and dour older woman, but loves Sabine enough to do just about anything to form a beneficial marriage match. Full of spunk and wit and conniving, Grandmother reminds me of the stubborn but lovable Violet Crawford in Downtown Abbey. I hope readers will fall in love with Lady Sherborne as much as they do Sabine.

What makes your protagonist an interesting character?

Sabine is a young noblewoman with a skin blemish on her arm that, if revealed, could cause her to be branded a witch and damage her chances of making a good match. She’s very self-conscious about her blemish and always wears long gloves to cover her arm.

In crafting Sabine’s blemish, I wanted to make a character who wasn’t the “ravishing beauty” we normally expect in fairy tales. She’s a young woman who struggles with her appearance and compares herself to others she considers prettier. I hope my readers can relate to her struggles and come away from the story learning to appreciate themselves the same way Sabine must learn to accept and appreciate herself, blemishes and all.

What did you learn in the course of writing this story?

I learned a lot about honor. Honor is a huge theme in this story (if you haven’t guessed from the title!) Over and over throughout the book, the characters must make honorable choices—putting the interests of others above their own and doing what’s right even when it’s hard.

As I wrote Sir Bennet’s point of view, I was always pushing him to act with a high code of honor. He was constantly sacrificing and doing what was right, even when he didn’t necessarily want to. In fact the story starts with him making a sacrifice by coming home to help his family in their time of dire need. He was willing to do whatever he needed in order to protect those he loved, even if he had to give up his plans and desires to do so.

The way he approached both life and love with honor is such a great example for us, both in our lives and relationships.

How do you get into the right frame of mind to write for teen readers?

I have 4 teenagers and one tween. So I’m surrounded by teen angst every day! As a result of dealing with lots of teen issues with my children and their friends, I find that I’m able to give my characters problems and flaws that cross the boundaries of centuries that modern readers can relate to. I love being able to weave in hope and encouragement that if my characters can persevere and handle the growing-up issues with integrity and strength, then my readers can too.

Why do you think that story is such a powerful way to communicate truth?

Stories have the power to teach us lessons and to bring us hope. And Christian fiction in particular has the power to point people to the true Giver of Hope.

Find out more about the book here:

For Love and Honor