Randy Singer is known for his contemporary legal thrillers. However, with his new novel, Randy spent years researching First Century Rome in order to deliver a powerful fictional account of the story of Theophilus—the Biblical figure who Paul addressed in his letters. According to Randy, The Advocate (Tyndale House) is the story he was “created to write”…

WHERE DID THE INITIAL INSPIRATION FOR THE ADVOCATE COME FROM? 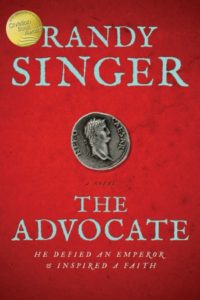 Two sources. I occasionally teach a class at Regent Law School on advocacy. As part of that class, I talk about the greatest trials in the history of the world. The most important trial ever was the trial of Jesus (which we know a fair amount about) but the second most important trial ever, in my view, was the trial of Paul in front of Nero (which we know next to nothing about). These trials are close in time to each other and I thought it would be fascinating to write a first-person account of somebody who was involved in both of them.

As I started researching the trial of Paul, I came across a book by a lawyer named John Mauck who suggested that the books of Luke and Acts were actually legal briefs to help in Paul’s defense and that Theophilus (to whom the books were written) was an investigator for Nero.

I took these ideas a step further and created the fictional story of Theophilus, a brilliant Roman advocate who served as the assessore, or law clerk, for Pilate and ultimately defended Paul in front of Nero.

WAS IT DIFFICULT TO TAKE CREATIVE LIBERTIES WITH THE HISTORICAL ACCOUNTS OF THEOPHILUS?

I would describe it as more “fascinating” than “difficult.” My commitment was to stay true to Biblical and Roman history but to fill in the story with the fictional account of Theophilus. It turns out that I selected nearly the perfect protagonist because he was at some of these pivotal moments in history that we know so little about and therefore I felt the freedom to take creative liberties based on what we know about Jesus, Paul, the Roman emperors, etc.

WHAT TYPE OF RESEARCH DID YOU CONDUCT?

I’ve been working on this project for five years, so I guess the simple answer would be “a lot.” I started with the Biblical accounts of the trial of Jesus and the life of Paul. From there, I dug into the First Century writers and read everything I could get my hands on about the Roman and Jewish culture.

I took a trip to Rome and had the good fortune of being taught there by a first-class historian named Cinzia Cutrone. There were also a number of well-written secondary sources I used, most of which I listed in the Author’s Note and Acknowledgments at the end of the book. Foremost among them was the book Pontius Pilate written by Ann Wroe.

WHAT WAS THE BIGGEST CHALLENGE IN WRITING THIS BOOK?

The biggest challenge was getting the cultural research right so it was a natural part of the story. I normally write contemporary legal thrillers and, as a practicing lawyer, I know and live in that world. But for this book, I knew the history but I didn’t know the culture. I wanted to write the book as somebody who was living in that culture, not as a historian looking back. To achieve that level of familiarity took a long time.

YOU SAID THIS BOOK IS ONE THAT YOU ARE THE MOST EXCITED ABOUT IN YOUR WRITING CAREER. WHY IS THAT?

Three reasons. First, I believe this book will have a greater spiritual impact than anything I’ve written. When we think about these First Century Christians, and the way they faced down the Roman Empire while suffering incredible persecution, it can only serve to inspire those of us who are Christians and make those who are not believers think hard about the faith.

Second, this subject matter is so critical to our faith. In The Advocate, we see the Bible as it is being written, we see the impact of Jesus on the culture, we see the way Paul and the other followers of Christ transformed lives. This is a pivotal point in history that seems a cut above the subject matter of a contemporary legal thriller.

Third, this book combined the various streams of my life into one creative flow. History teacher; pastor; lawyer; author of legal thrillers—they all came together in this one book. This feels like the one book I was created to write.

YOU DID SOME ON SITE RESEARCH IN ROME FOR THIS NOVEL–WHAT SURPRISED YOU THE MOST WHILE YOU WERE IN ROME DIGGING UP FACTS?

The resiliency of what Rome built and the influence of these First Century events. In terms of resiliency, I live in Virginia where we are very proud of our history that goes back a few hundred years. But in Rome, you are looking at and touching structures that go back to the time of Jesus.

I was also impressed with the impact of Rome on culture (many of the ideas still permeate our culture today) and the influence of these early Christians.

Scripture says that Jesus came “in the fullness of time.” Writing this book helped me see how Jesus came at such a critical juncture in world history. Among other things, His timing showed the world that a movement based on spiritual principles and the kingdom of the heart can transform one of the most powerful empires in the history of the world. The supernatural power of the cross and resurrection proved too much for the earthly power of Rome.

HOW MUCH IS ACTUALLY KNOWN ABOUT THEOPHILUS FROM HISTORICAL RECORDS?

Virtually nothing except that the Luke wrote the books of Luke and Acts to him so that he might know the certainty of the things he had been told. We also know that he was probably a high-ranking official because he is addressed as “most excellent Theophilus.” Finally, we know that his name means “lover of God.” All the rest of his story came from my brain.

WHILE RESEARCHING THIS BOOK, YOU HAD TO DIG DEEP INTO THE HEARTS AND MINDS OF 1ST CENTURY ROMANS. HAVE WE CHANGED AS MUCH AS WE THINK WE HAVE? OR IS THE HUMAN CONDITION EXACTLY THE SAME AS IT WAS 2,000 YEARS AGO?

The thing that shocked me as I researched this book was how much like Rome we are in America today. The Roman Emperors were called “emperors of bread and circus,” meaning that as long as they kept the people fed (with government hand-outs) and entertained, they could stay in control. Rome became arrogant and lazy as a culture and slid rapidly into sexual promiscuity and an insatiable bloodlust. Politics became hopelessly vitriolic and self-serving. Religion was syncretistic, meaning it was a mish-mash of several different belief systems. People cared more about fame, money and power than family values. Rome was America, just 2,000 years earlier.

But here’s the good news: the early Christians transformed the culture and spread the faith at epic rates. We can see the same thing happen in America if we are equally committed to the Lord and dependent on the power of His Spirit.