In Jody Hedlund’s newest novel, Unending Devotion (Bethany House), a young lady named Lily struggles against corruption, violence, and predation in the logging camps of 1880’s Michigan in a desperate attempt to find her lost sister.

WHAT WERE YOUR GOALS WRITING UNENDING DEVOTION?

During my research for the book, I began reading biographies about people who lived during the lumber era. I ran across stories of young women who didn’t fit into the glamorized legends and songs that we normally associate with that time period. The stories of many of these women were much darker. They were tales of women who were abused, exploited, and even enslaved.

Unending Devotion is inspired by one of those women, Jennie King. She rode a train into central Michigan in answer to a newspaper ad for a job. She expected to work in a hotel. Instead, she found herself enslaved in a brothel. After trying to escape multiple times, one local family finally helped smuggle Jennie out of town and to a safe place.

It was my hope in Unending Devotion to bring attention to some of the problems that existed during the lumber era, particularly the issue of white slavery, which is unfortunately still a problem within the United States (and throughout the world) today.

THE SETTING FOR THIS BOOK IS MICHIGAN IN 1883. WHAT ABOUT THIS HISTORICAL PERIOD AND SETTING PIQUED YOUR INTEREST? 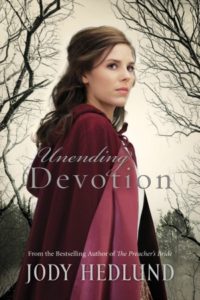 Unending Devotion is set in Harrison which was a real town in central Michigan that sprang up during the lumber era. In the early 1880’s it had a population of only 2000 people, but had over 20 saloons. I thought that would make for a dangerous and interesting place to set a book.

In my research, I also ran across a man by the name of James Carr. He was a real villain who took up residence in Harrison to prey on the shanty boys of the area. He built a two-story saloon and brothel on a hill overlooking the town and named it the Devil’s Ranch Stockade. Every night between 50 to 250 men visited the Stockade. So many men lost their lives there that eventually the hill outside the Stockade became known as Deadman’s Hill. I had to include James Carr as the villain in my book. He’s definitely the perfect villain material: mean, nasty, and dangerous!

DID YOU DO ANY SPECIAL RESEARCH FOR THIS NOVEL? HOW FAMILIAR WERE YOU WITH THIS TIME PERIOD BEFORE YOU WRITE THE BOOK?

I live in central Michigan. In fact, most of this story happened just around the corner from where I live. A bike trail that my family loves happens to be one of the train tracks used to transport lumber out of the camps to the sawmills. While I was somewhat familiar with the this historical era and had visited local museums with my family, I still had to do an enormous amount of research. As with most of my books, I read numerous biographies and time period related books so that I can immerse myself in the era and glean as much information as I can before I start writing.

WHERE DO YOU DRAW THE LINE BETWEEN HISTORICAL ACCURACY AND TAKING DRAMATIC LICENSE?

I tend to gravitate toward using real people and events in my stories. And while I try not to distort the truth about what really happened or the facts that we know about those people, I always have to fill in the blanks. That’s part of the fun of being a fiction writer—being able to imagine what could have happened and asking the question, “What if?”

And while I feel at liberty to shape the unknowns to fit my story needs, I try to stay historically accurate with time-period related details. While I’m not perfect at it, I do my best to keep my characters acting true to the era in regards to language usage, costume, food, and other miscellaneous details.

WHAT ARE THE LESSONS OF THAT ERA THAT ARE STILL RELEVANT TO READERS TODAY?

Lumbering took a toll not only on lives but also on land. Many lumber barons had the philosophy of getting all they could from the land, as fast as they could, and then letting tomorrow’s people handle tomorrow’s problems. They turned a blind eye to the many social ills that developed as a result of the lumber era.

Today, I think it’s all too easy for us to turn a blind eye to the problems around us (like white slavery which is still very much a problem in our world), and to assume that others are helping and solving social ills. At times we may even shrug off the issues, callously assuming that we’ll let tomorrow’s people handle the problems.

It’s my hope that Unending Devotion will inspire us all to rise up, stand tall, and fight against the injustices that still exist today.