Romantic suspense writer, Dee Henderson is up to it again—thrilling fans with her edge-of-the-seat stories of romance and intrigue! In her newest novel Unspoken (Bethany House), she tells the story of a woman who spent four years at the hands of captors and the mystery that cloaks her life. Dee answered five questions for us about her new release…

THE STORY IS ABSOLUTELY INTRIGUING. WHERE DID YOU COME UP WITH THE PLOT FOR THIS NOVEL? 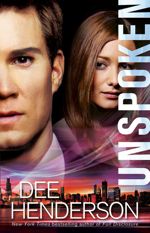 I wanted to write a story about a woman with a dark past, and the man who fell in love with her. I wanted to explore the dynamics of what it means to love someone so absolutely even the most painful of histories could be overcome. I wanted a story where love can flourish. It became a kidnapping story as an event that would be easily understood without me having to go into many detail about what had happened during those four years.

WHAT WAS THE MOST DIFFICULT PART ABOUT WRITING THIS NOVEL?

The decision to stay in Bryce’s viewpoint through much of the story created some challenges as a writer, but was also the key to having the story work. The opening pages in first person Charlotte’s view, and the rest of the book in Bryce’s point of view, let me show the dynamics of how the love relationship formed in a way that the reader could be part of the entire journey.

HOW DO YOU COMBINE SUSPENSE AND ROMANCE IN SUCH A WAY THAT ENTERTAINS BOTH FANS OF EACH GENRE?

I’m not certain that I satisfy either romance or suspense fans with my books–I personally tilt much more toward calling these books a straight romance that also has events unfold in their lives where you are not sure what will happen or how the story will move. I experience them that way while writing the story–as a romance, a get to know each other book, and my characters are having go react to what is going on around them. I have a sense when I start the book the events which will play out for them to deal with, but much of the book is a surprise to the author as it unfolds.

WHAT DO YOU THINK MAKES FOR CAPTIVATING MAIN CHARACTER?

I love a strong character who has made decisions about their life, who has a sense of who they are, and where they want to go. The romance that unfolds tends to play to the strength of each character, rather than change their personality. I want an authentic story that reflect how these people would act and decide matters in their lives.

WHAT’S ON THE HORIZON FOR YOU?

Undetected will be in stores in May 2014. Mark Bishop is a submarine commander. He made a wonderful hero! I wanted to return to write another military romance because of the challenge involved in crafting such a book. I think it was a success for the story I wanted to write. It’s again a different story than others I have written for how the romance plays out. I think readers will enjoy it.