John “Jack” M. Cunningham, Jr. grew up on the Gulf Coast. He’s a native of Mobile, Alabama, who also lived in New Orleans, Louisiana for twenty-five years. A graduate of the University of Alabama, he’s a former history teacher. He’s written professionally for over thirty years, and his work has appeared in numerous Christian publications. He’s a writing teacher and speaker who has helped many beginning writers on their path to publication. In September he released his latest novel, Turfmen and the Prodigal:A Story of Old Mobile.

Book Summary:
Bitter, backslidden Christian Gideon Deshler spirals toward destruction, his demise hastened by evil Elvira Sturgis with whom he falls in love. She and her father, president of Alabama’s Spring Hill Jockey Club, brutalize their slaves. Two of Sturgis’s slaves, the jockey Ned and his girlfriend Becky, must escape to Canada so they can fulfill their dreams. But how? Alabama is far away from Canada, and it doesn’t have an Underground Railroad.

Meanwhile, a mystery surrounds the death of a champion Thoroughbred named Green Legs. Before he can solve it, Gideon must get delivered from Elvira’s spell and reconcile with Sam Quarles, with whom he’d fought a duel.

Sam’s brother, Joe, feuds with Gideon’s friend, Owen Washburn, over Green Legs’s death. To keep his promise to his dying father, Joe vows to regain the status of his father’s horse farm in a big match race against Owen’s champion, Comet. Joe’s hope lies in an ornery Thoroughbred, Johnny Boy. If Johnny doesn’t win the Pride of Alabama Stakes, Joe vows to kill himself, for horseracing is his life and he’d have failed his father’s dying wish. Yet, Green Legs’s real killers and their accomplice have other plans.

Will Gideon and Sam reconcile in time to save Joe and Johnny Boy? Will Ned and Becky escape to freedom, or will they continue to suffer the Sturgises’ cruelties? 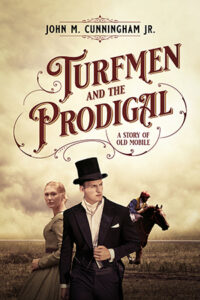 Buy Turfmen and the Prodigal from Amazon HERE!