Doors to the Past series will feature dual-time period romantic suspense stories set against a historic American landmark.

Barbour Publishing is pleased to announce the launch of a one-of-a-kind new fiction series where history and today collide in stories full of mystery, intrigue, faith, and romance. Each book in the Doors to the Past series will feature a dual-time period romantic suspense story set against a historic American landmark.

The 12-book series will kick off in February 2021 with The Lady in Residence by veteran Christian fiction author Allison Pittman. This book, which includes stories from both 1915 and 2017, is set in the Menger Hotel in San Antonio, Texas, and gives a nod to the building’s real-life ghost story of Sallie White. It also features the fictional character, Hedda Krause, who checked into the historic hotel, but never checked out—and 100 years later, her presence is still felt.

Releasing approximately every other month by a team of well-known authors, Doors to the Past will satisfy voracious readers of both inspirational and historical fiction. The books are written in such a way that they can be read in succession or as standalones, making them perfect for readers interested in specific time periods or landmarks from American history.

February 2021: The Lady in Residence by Allison Pittman
Setting: The Menger Hotel in San Antonio, Texas 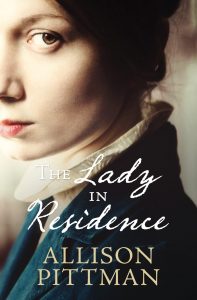 The Lady in Residence
Doors to the Past
Allison Pittman

Can a Legacy of Sadness be Broken at the Menger Hotel?

Visit historic American landmarks through the Doors to the Past series. History and today collide in stories full of mystery, intrigue, faith, and romance.

Young widow Hedda Krause checks into the Menger Hotel in 1915 with a trunk full of dresses, a case full of jewels, and enough cash to pay for a two-month stay, which she hopes will be long enough to meet, charm, and attach herself to a new, rich husband. Her plans are derailed when a ghostly apparition lures her into a long, dark hallway, and Hedda returns to her room to find her precious jewelry has been stolen. She falls immediately under a cloud of suspicion with her haunting tale, but true ghost enthusiasts bring her expensive pieces of jewelry in an attempt to lure the ghost to appear again.

In 2017, Dini Blackstone is a fifth-generation magician, who performs at private parties, but she also gives ghost walk tours, narrating the more tragic historical events of San Antonio with familial affection. Above all, her favorite is the tale of Hedda Krause who, in Dina’s estimation, succeeded in perpetrating the world’s longest con, dying old and wealthy from her ghost story. But then Dini meets Quinn Carmichael, great-great-grandson of the detective who originally investigated Hedda’s case, who’s come to the Alamo City with a box full of clues that might lead to Hedda’s exoneration. Can Dini see another side of the story that is worthy of God’s grace?

PRE-ORDER THE BOOK FROM OUR STORE!