Ryan Steck is an editor, an author, and the founder and editor in chief of The Real Book Spy. Ryan has been named an “Online Influencer” by Amazon and is a regular columnist at CrimeReads. TheRealBookSpy.com has been endorsed by #1 New York Times bestselling authors Mark Greaney, C. J. Box, Kyle Mills, Daniel Silva, Brad Thor, and many others. A resident of Michigan, along with his wife and their six kids, Steck cheers on his beloved Detroit Tigers and Lions during the rare moments when he’s not reading or talking about books on social media.

In this interview, Ryan talks with us about his new book, Fields of Fire.

FF: Most people in the thriller community know you as the Real Book Spy. Now it’s your turn to be the author. Tell us how being the Real Book Spy has prepared you to release your debut novel, Fields of Fire.
There’s no doubt that being a Book Spy had a big impact on me when it came to finally sharing the story I’d wanted to tell. I love books, and it was that deep love of authors such as Vince Flynn and C. J. Box (among others) that, looking back, shaped me as a writer. It’s no coincidence that Matthew Redd and Fields of Fire embodies many of the traits you’d find in Mitch Rapp or Joe Pickett. I’ve also had the pleasure of connecting with thousands of readers and, over time, feel like I’ve developed a pretty good sense of what they’re looking for in a thriller. More than anything, I hope all of that leads to an exciting reading experience for those willing to give my book a chance.

FF: What inspired you to write Fields of Fire?
Well, I’ve always wanted to write. But believe it or not, Matthew Redd first came to me during a tenth-grade English assignment in high school. We were tasked with writing a short story, and I chose to write about a teenager turned vigilante named Matty Redd. Over the years, that voice—Redd’s voice—stuck with me. Eventually I decided to listen to what he had to say, and the early concepts for Fields of Fire were born. I’m also a huge fan of Vince Flynn and C. J. Box and wanted to merge their styles and characters into something nobody else was doing. The more I thought about it, the more I realized that Matthew Redd was perfect for that role. And things just sort of took off from there.

FF: You said that you knew this story before you ever sat down to write it. How long did it take you to get the story down on paper for the first time?
Two months! Crazy, right? Now that was just a first draft, and it admittingly wasn’t very good, but after years to think about it, I felt like I had the story mostly figured out. So it was just a matter of sitting down long enough to type it all out. From there, I spent years editing, tweaking, and changing things to shape it into the book that it is today.

FF: You have quite the story of how the main character, Matthew Redd, came about. Tell us about him.
It’s funny now, looking back on it, to be honest with you. In tenth grade, we had an intern teaching our English class who assigned a fun creative writing project. She actually told us we could write anything we wanted, and it could include anything. Language, violence, you name it. Well, I guess I took it too far. I wrote about a teenage vigilante named Matthew Redd who fought bad guys late at night. I remember a couple of days after turning it in, I got called down to the principal’s office. Turns out, my English teacher looked over the short stories we’d submitted and sent mine to the principal, who then sent it to others in the school district. Long story short, I was suspended for a week. Since then, though, I’ve reconnected with that former intern, a wonderful woman who is so special to me, and we’ve laughed about the whole incident. In my house, the running joke is that over my lifetime, I’ve gotten a week off of school and signed a book deal all thanks to Matthew Redd!

FF: You say that Matthew Redd has lived in your head for so long that you hear him sometimes. What do you mean by that?
From day one, Redd has always been a fully fleshed-out character in my head. Almost like a lifelong best friend or something like that. I know how he thinks and how he would respond in certain situations, to the point that when I find myself in a unique situation, I often compare the way I handle things to how Redd might. It’s hard to explain because he is, of course, fictional, but to me, Matthew Redd feels real.

FF: Why did you decide to make Redd’s character adopted?
I’m a big believer that blood makes you relatives, but love makes you a family. My wife and I have six children, but my oldest three aren’t biologically mine. Adopting them was one of the most joyful moments in my life, and I think I just wanted to touch on that. There are so many children out there who need someone to love them. Matthew Redd had a hard life, but because there was someone willing to love him and teach him, he turned into the man you meet in Fields of Fire.

FF: Your second favorite character to Matthew Redd is Emily, his high school sweetheart. Why is that? Tell us a bit about Emily.
My wife is my rock, so it’s pretty natural that Redd turns to Emily for support, advice, guidance, and help. I’ve seen my wife, Melissa, overcome so many things in her life, and if I’m honest, she’s way tougher than I am. In many ways, my relationship with her, and how I view her, mirrors the way Redd looks to Emily, because it’s all I really know.

FF: What are some of the themes that you wanted to explore in Fields of Fire? Why were those specific themes important to you?
Redemption was a big one. I’m not someone who believes in throwing people away, so to speak. We’re all imperfect and need a little help sometimes, and I’m fascinated with how far some people can go in life when they put their mind to it. I also wanted to explore things like forgiveness, going back home, dealing with the loss of a loved one, and then obviously revenge.

FF: You say that redemption is a big topic in this book. How so? Why was that important for you to include?
As mentioned above, I don’t believe in giving up on people or throwing them away. I wasn’t raised that way. I value life and think it’s precious and enjoy seeing people succeed. We all love a good comeback story where someone is able to overcome their worst lows to soar to new heights. Then I got to thinking…what might that look like for a guy like Matthew Redd?

FF: How does faith play a role in this novel?
My faith is very important to me, but I never wanted to hit anyone over the head with my beliefs. So it honestly doesn’t play a huge role in Fields of Fire, but I touched on it and, without giving anything away, have plans for how I’ll incorporate more of those themes down the road.

FF: How do you hope thriller fans feel after reading the very first novel written by The Real Book Spy?
More than anything, I just hope they enjoy the book. It’s not lost on me that someone is spending not only their hard-earned money on this but also, and more importantly, their time to read it. I sure hope that when they turn the final page, they enjoyed the ride and found it worthy of their time. Beyond that, I tried to give readers a little glimpse of where the next book is headed, and I sure hope they’re excited to read that one too!

FF: Any chance we’ll see more Matty Redd in another book someday?
Yes! I just finished the second book and have already started on the third. My plan is to write Matthew Redd thrillers as long as people want to read them.

Book Summary:
Waiting to be deployed on a critical mission, elite Marine Raider Matthew Redd stops to help a stranger and wakes up hours later to learn his team was wiped out in an ambush. Unable to remember anything, Redd can’t deny the possibility that he’s somehow responsible for the information leak that led to the massacre. He’s given a deal to avoid a charge of treason, but it means walking away from the corps and the life he loved.

As he faces his loss, Matty gets a cryptic message from his adoptive father, J. B.: “Trouble’s come knocking…Might need your help.” He points his truck home to rural Montana, only to discover that J. B. is dead and the explanation for his death is far from satisfying. Determined to dig up the truth, Redd uncovers a dark global conspiracy with his hometown at the center and no team at his back—except one he might find among past friends, old enemies, and new allies, if he can figure out who to trust. 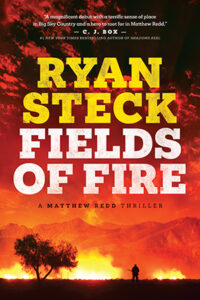 Buy Fields of Fire from the FF Store HERE!