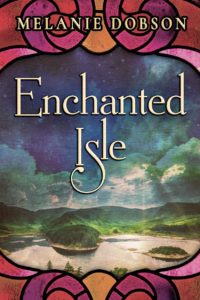 Would you tell our readers a little more about what they can expect from Enchanted Isle? What kind of story is it, and what are its central themes?
Enchanted Isle is a historical mystery and inspirational romance about embracing God’s unique gifts, finding beauty in unexpected places, and restoring relationships broken in the past.

The story begins in the spring of 1958 as Jenny Winter embarks on a two-month adventure to photograph the beautiful scenery in England’s Lake District. When a local named Adrian Kemp tells her why he’s drawn to an abandoned amusement park on Windermere, she glimpses a kindred spirit in this reckless, haunted young man. As she opens her heart to Adrian, the two stumble into a labyrinth of mystery leading back a generation to an unforgettable romance and an unsolved murder that still casts a shadow over the lakes. As long-held secrets come to light, Jenny and Adrian work together to reconcile the past and restore a lost dream.

Which of this book’s characters surprised you the most?
That would probably be Cora Banks. She is a quirky, resilient glass artist with a secret that she’s harbored for about twenty years. She started out as a minor character, but while I was writing this book, I realized that the complexity of her story was significant to the plot. She becomes an antagonist in a way for Jenny, but unlike the main antagonist in the book, her opposition is motivated by concern and authentic fear.

You mentioned that Jenny’s adventure began with the intent to photograph scenery. Do you also enjoy exploring the world through a camera lens, or is there another reason you gave her that hobby?
I wanted Jenny to think in pictures, often seeing what other people miss in the beauty around them. She’s an art student who grew up in a sheltered society home, but as she begins this new journey in England, I wanted her to branch out and begin to use her grand imagination and the latest technology at the time— a Fujica Automagic with color film—to capture what she sees. I do love exploring the world through a camera lens as well. During college I used a darkroom like Adrian and Jenny do in the story, but I never quite got the hang of developing film.

What is your “mission” as a writer? And how does your faith inform what you write?
The power of a good story is that it can inspire and even change a reader wherever they are on their journey. I believe this is why Jesus often told parables. The same parable can communicate something very different but equally important to members of the same audience. As a follower of Christ, my desire is to stir both hearts and souls through story. Some of my novels, I hope, inspire readers to action while others like Enchanted Isle are more like a parable to describe one of the many characteristics of God. This book is a reflection of God as creator of beauty, wonder, imagination and ultimately redemption.

Speaking of inspiring readers, your last book, Catching the Wind, has gotten rave reviews. For our readers who may not be familiar, would you share a little about that one?
Absolutely! Thank you for asking. The story for Catching the Wind was inspired by a weeping cedar tree, outside the window of my favorite coffee shop. In my mind’s eye, I saw two German children, a boy and girl, playing in a tree house there. They were in danger, but at the time I didn’t know what threatened them. I just knew that Brigitte and Dietmar had to run, and they would lose each other along the way. As I began writing, the story turned into a time-slip novel. Seventy years after Brigitte and Dietmar escape Germany, an American journalist begins to uncover their remarkable journey and determines to reunite Brigitte with the boy who rescued her long ago.

Can you give us a hint about what you may be working on next?
Definitely! Fifteen years ago my husband and I backpacked across Europe, and our favorite place to explore was Hallstatt in Austria with its medieval village, alpine lake and castle. I’m now writing a time-slip story about Jewish heirlooms hidden near Hallstatt during World War II. The historical plot is about a young man and woman who determine to help their Jewish friends hide what the Nazis were trying to steal away. In the contemporary story, my main character discovers a list in an old book that connects her with the Austrian woman who was hiding this treasure for her friends—a woman who is guarding a secret of her own.

Is there anything I have not asked that you would like to share with FamilyFiction readers?
Thank you for all of these great questions! I am inspired by many things as a writer, but most of all by abandoned spaces. I want to know the stories of these old houses, towns, and parks, but I also think of them in terms of restoration, symbols of hope that God can rebuild the brokenness in all of our stories. I hope readers will be inspired by the wonder of Enchanted Isle along with the mystery of its treasure and the hope of restoration and redemption in our world today.

Melanie Dobson is the award-winning author of twenty time-slip, historical romance, and suspense stories including Catching the Wind and Chateau of Secrets. Three of her novels have won Carol Awards, and Love Finds You in Liberty, Indiana won Best Novel of Indiana. Melanie loves to explore old cemeteries and ghost towns, hike in the mountains, and play board games with her family. She lives near Portland, Oregon with her husband Jon and two daughters. Melanie loves connecting with readers—the best places to find her online are www.melaniedobson.com andwww.facebook.com/MelanieDobsonFiction.