The filmmakers behind Overcomer talk about encouraging movie audiences to find their identity in Christ.

The highly anticipated sixth film from Alex and Stephen Kendrick, Overcomer, will be in theaters this August. Filled with a powerful mix of faith, a twist of humor, and a ton of heart, the Kendricks’ new venture tackles the vital issue of spiritual identity in a unique and fresh way. 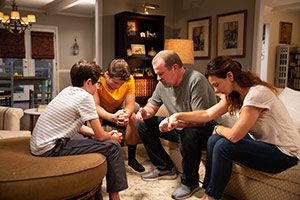 Life changes overnight for coach John Harrison when his high school basketball team’s state championship dreams are crushed under the weight of unexpected news. When the largest manufacturing plant in town suddenly shuts down and hundreds of families begin moving away, John must come to grips with the challenges facing his family and his team. Urged by the school’s principal to fill-in and coach a sport he doesn’t know or like, John is frustrated and questioning his worth—until he crosses paths with a student struggling with her own journey.

Filled with a powerful mix of faith, a twist of humor, and a ton of heart, Overcomer stars Alex Kendrick, Priscilla Shirer, Shari Rigby, Cameron Arnett, and introduces Aryn Wright-Thompson. Opening nationwide on August 23, Overcomer dares to leave you filled with hope, inspired to dream, and asks the question: What do you allow to define you?

“The movie Overcomer is about identity, an issue everyone deals with,” says Stephen Kendrick. “Everyone needs to answer the questions: ‘Who is God?’, and ‘Who am I?’, and the Scriptures deal with both of those things. When a person discovers who they are in Christ, it opens up an understanding of how they can live that out in a daily basis in what they do in their relationships with others. When we started the process with Overcomer, Alex began to unpack this idea of a cross-country runner who’s dealing with the issue of identity, and at the same time, I’d been studying Ephesians 1 and 2. We can see how the Lord was paralleling our paths to specifically make this movie.”

“Cross country is a very difficult sport,” says Alex Kendrick. “From the time you start, you do not stop or pause until you cross the finish line. And in many regards, that’s like our life; that’s our journey of faith.”

“As people are walking out of the theater,” says Stephen Kendrick, “we hope that they begin to ask questions about where their identity is found, because too often we find it in our circumstances, in our titles, in what other people are saying about us, in our jobs, in our positions or awards. Those things can be taken away.”

“I hope moviegoers will realize their salvation is about much more than just having a ticket to eternity,” says Priscilla Shirer, who plays the role of high school principal Olivia Brooks in the film. “They were actually given a brand-new identity. Which means, they have access to spiritual blessings, they have an inheritance, they have all this stuff that’s available to them, this side of eternity. And when you realize that, that means the decisions you make, the relationships you have, the trajectory you choose, the ambitions that you hold, all of that stuff will reflect, and be indicative of your brand-new identity. That changes and transforms the way you live.”