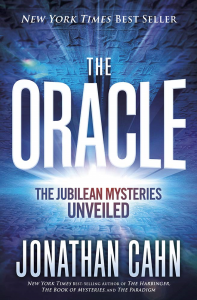 Debuting in the top spot on the October 2019 list of Christian Bestsellers, Jonathan Cahn’s The Oracle: The Jubilean Mysteries Unveiled (Frontline) shows there is still a big interest in fiction driven by end-times themes. In addition to being #1 with the Evangelical Christian Publishers Association (ECPA), and also ranked highly on Publishers Weekly, the New York Times, and Amazon.

The Oracle is the biggest, most all-encompassing mystery I’ve ever committed to writing—in many ways it is the mystery of the ages. It contains everything and everyone, from Moses to Mark Twain, from the prophet Jeremiah to President Donald Trump. It’s the mystery that lies behind the past, the present and what is yet to come. It contains what I believe is the master blueprint that explains the end times and what is taking place before our eyes in America and throughout the world. It even contains the mystery and blueprint for each of our lives. [SOURCE: Charisma News]

The Oracle opens up the Jubilean mysteries and a revelation so big that it lies behind everything from the rise and fall of nations and empires (even America), the current events of our day, the future, end‐time prophecy, and much more.

The book takes the reader on a journey to find the man called “the Oracle.” One by one each of the Jubilean mysteries will be revealed through the giving of a vision. The reader will discover the ancient scrolls that contain the appointed words that have determined the course of world history from the onset of modern times up to our day.

As with The Harbinger and The Book of Mysteries, Cahn reveals the mysteries through a narrative; a traveler is given seven keys, each one will open of one of seven doors. Behind each door lies a stream of mysteries. The reader will be taken on a journey of angels and prophetic revelations waiting to be discovered behind each of the seven door—the ancient secrets that lie behind the world‐changing events of modern times—and revelations of what is yet to come.