While Jerry B. Jenkins and his wife Dianna celebrated their 40th wedding anniversary with a trip to Beijing and Bangkok, Jenkins took copious notes. 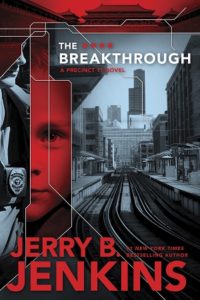 “I knew one of the settings would find its way into my next novel,” he says. Sure enough, in The Breakthrough (Tyndale House), police chief Boone Drake finds himself pursuing a human trafficking ring on the streets of Beijing. Jenkins says it surprised him to discover in his research how widespread, lucrative and horrific human trafficking really is. “The documentation can make you feel helpless and outraged,” he says. “My goal in this novel was to have one of the perpetrators get what was coming to him.”

The Breakthrough is the final book in Jenkins’ Precinct 11 series, a trilogy of cop thrillers set in Chicago. “I see the series as an homage to all the cops in my family,” he says. “My dad and two older brothers were career law enforcement officers, and many in my extended family were too. I wanted the cop stuff to be right, and it’s been gratifying to hear from many police officers who’ve read these and say they found them authentic. “Boone Drake is an everyman. He has gifts and abilities and ideals, but all these are tested and stretched and often obliterated. He struggles with his faith, and we find out what he does when everything has been ripped from him.”

A self professed “pantser” (a novelist who writes from the seat of his pants), Jenkins always starts his books with character rather than plot, often surprising himself as well as readers. “I may have the germ of an idea where the story is going, but I let the plot emerge from putting interesting characters in difficult situations and writing to find out what happens.”