The prolific author talks about his new archaeological thriller, about the other categories he writes—and those he won’t.

Jerry B. Jenkins’s books have sold more than 70 million copies. He’s known to most readers as the co-creator of the blockbuster Left Behind series, but he’s also written historical novels, biographies, how-to books, children’s books, and so many more. His latest book is Dead Sea Rising (Worthy Publishing), a suspense novel that places his archaeological protagonist in the middle of a mystery with moral and political implications in the Middle East. In this interview, Jerry outlines his plan for the Dead Sea Chronicles, shares a surprisingly wide-ranging list of his favorite characters, and reveals the time he thought he should abandon his writing… 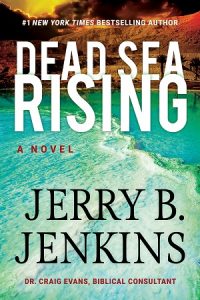 Jerry, Dead Sea Rising is the first book in a new series. What can you tell us about the Dead Sea Chronicles?

I envision a six-book project that might grow to twelve—but that’s entirely dependent on whether readers like the characters and the story. I couldn’t be happier with the enthusiasm the first volume has engendered in Worthy Publishing’s office. There’s no substitute for inhouse buzz.

No spoilers, but Dead Sea Rising is like part Indiana Jones or National Treasure, part political thriller, with a foot planted firmly in biblical archeology. What inspired you to go in this direction?

I’m blessed to be at a place in my writing life where occasionally ideas come to me from publishers. Nine of ten I pass on, because I have ideas of my own. But I immediately resonated with this one from Worthy and loved the idea of getting to run with it.

If you squint at this book a certain way, it looks like it falls somewhere between DaVinci Code and Left Behind. Is that a fair assessment, or does that description make you cringe?

Hmm, cringe at two phenomena that have totaled more than 140 million books sold? No.

While Dead Sea Rising enjoys some commonalities with those—the international scope, the potential for controversy, and hopefully the epic feel of the story—it’s unique in other ways. My main character is a late 30s female archaeologist. I interweave a story from ancient Mesopotamia beginning four thousand years ago with the birth of Abram. There’s also a Vietnam subplot.

Want to know about who Jerry considers a great lead character? Find his surprising list on the next page…