Jerry B. Jenkins‘ books have sold more than seventy million copies. Twenty-one of his titles have reached the New York Times, USA Today, Publishers Weekly, and Wall Street Journal bestseller lists. The phenomenally bestselling Left Behind Series inspired a movie starring Nicolas Cage. Jenkins has been featured on the cover of Newsweek and his writing has appeared in Time, Reader’s Digest, Guideposts, and dozens of other periodicals. H

FF: Your new release is Dead Sea Conspiracy, the sequel to Dead Sea Rising. Tell us a little about that first book and how the story continues in Dead Sea Conspiracy.
The story is about a young woman archaeologist who is a Messianic Jew on the verge of discovering evidence that could change the face of Islamic/Christian tensions. Naturally she faces opposition in the very countries she seeks to dig in, because of her faith, her age, and her gender. In alternating chapters, I jump back to tell the story of Abraham from four thousand years prior, so readers actually get a contemporary and an ancient story in one novel.

In Dead Sea Conspiracy, my heroine gets her permit to dig in Saudi Arabia and indeed makes a dramatic discovery–only to face all manner of betrayal and opposition, some from within her own staff. In the alternating ancient story, we see Abraham come of age and become the father of nations.

FF: Anyone who loves to read wonders how an author comes up with story ideas. Can you talk about the back story of Dead Sea Conspiracy, and why you wanted to write this story?
This was one of those ideas that comes from the publisher to the writer. It was very embryonic and I was given free rein to run with it, so I’ve had a lot of fun with it.

FF: Your main character in Dead Sea Conspiracy is archeologist Nicole Berman. Introduce us to your heroine and talk about some of her qualities.
She’s brilliant, of course, with two earned doctorates. And she’s also determined, headstrong, and devout.

FF: As you say, Dead Sea Conspiracy jumps from chapter-to-chapter from a present-day story to one from four millennia past in ancient Mesopotamia. Talk about these parallel stories, and why you decided to write the book in this format, where you alternate chapter by chapter.
It seemed to me that we needed the ancient story to make the contemporary story make sense. Both deal with family dynamics and, naturally, the history of the Middle East. Many have asked if I wrote one or the other story first, then blended the two for the sake of the novel. Actually I didn’t. I wrote the stories in the very sequence readers see them in the book, in alternating chapters. I get my main character deep into a situation, then jump back four thousand years to my second main character and do the same. Hopefully this keeps readers turning the pages to find out what happens next.

FF: The cover of the book credits Dr Craig Evans as your Biblical Consultant. Tell us about his contribution to the books. Why was it important for you to use a Biblical scholar in writing these novels?
Craig Evans has been a godsend, being not only a seminary professor but also an archaeologist. I like to say he’s the smartest guy in the room, regardless of the room. He also has an uncanny knack for keeping the cookies on the lower shelf where a layman like me–anything but a theologian or scholar – can reach them. He keeps me on track biblically, historically, and technically, especially when it comes to archaeology–and a great privilege for me was getting to visit the Holy Land with him.

FF: What similarities do you see between Dead Sea Conspiracy and your son Dallas’s phenomenally popular The Chosen TV series?
There are many, actually. He and his cowriters are telling the true stories from the Bible while simultaneously imagining what might have led up to them–in essence, backstories that are plausible. Especially in my ancient story, I’m doing the same–imagining Abraham’s upbringing.

FF: When you are writing multiple characters, how do you keep them all straight?
Well, that’s the challenge. I’m not an Outliner or Plotter but rather what’s called a Pantser. I write by the seat of my pants as a process of discovery. But I do have to take a few notes as I go to make sure I’m keeping track of all the players and paying off on all my setups. That’s partly a function of my writing approach, wherein the first thing I do every day is a heavy edit and rewrite of everything I’ve written the day before. That keeps me engaged with the story and the characters.

FF: Who do you think might be the most underestimated character in Dead Sea Conspiracy?
I have an orbital character named Pranav Chakrabarti, an Indian born U.S. citizen who happens to be an NYPD detective who goes to Saudi Arabia with Nicole Berman as her personal security. He turns out to play a much bigger role in the story than even I expected. That’s the fun of writing as a process of discovery.

FF: Life is stressful, and we live in difficult times. Why do you think that the power of story is more important than ever?
Stories have the ability to transport us and take our minds off all the division and conflict we face every day. On the other hand, conflict is the engine of fiction – but it’s someone else’s conflict, so it can be an escape and also be instructive. I inject a lot of conflict into my stories but always try to include a few instances where people with diametrically opposed views find a way to dialogue respectfully.

Book Summary:
Archaeologist Nicole Berman is the first woman to be awarded a permit to lead a dig in Saudi Arabia. Nicole believes what she hopes to discover has the power to to rewrite world history. She assembles a team that will ultimately surprise—and in some cases—betray her.

In a parallel storyline, readers are launched back to ancient Ur where young Abram is sent to learn from his forebears, who tell him firsthand stories of being on the ark during the Great Flood. 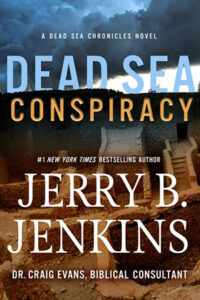