Tamera Alexander is taking history buffs back to the Belmont Mansion for the third time. Set in her hometown of Nashville, Tamera tells the story of a young woman blazing a trail by confronting social norms. Tamera answered all of our questions about A Note Yet Unsung (Bethany House), the final novel in her Belmont Mansion series. 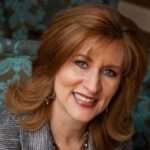 This isn’t the first time you’ve set your stories in Nashville history. What is it that drew you to the Belmont Mansion to write this series?

By far, what drew me is Belmont Mansion’s intriguing Southern history! Adelicia Acklen, mistress of Belmont Mansion, was the richest woman in America in the 1860s-70s, and she was a spitfire! Adelicia, a prominent secondary character throughout the series, loved three things with a passion—art, nature and music. So when I started brainstorming these novels the themes came rather easily. Thanks, Adelicia!

What makes your main character, Rebekah, an intriguing protagonist?

I love researching and writing about women who blazed trails for those of us who follow in their footsteps, and Rebekah Carrington, the heroine in A Note Yet Unsung, is just such a woman. She’s a master violinist at a time when women weren’t allowed to play the violin in public, much less be in an orchestra.

Can you tell us about your research process and if you found anything surprising in the historical facts you uncovered? 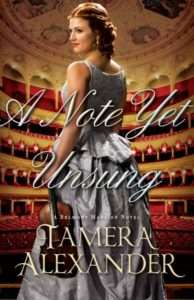 The idea for A Note Yet Unsung occurred when I happened upon the following 19th-century quote—“Woman, lovely woman, is always to be admired—except when she is playing in an orchestra.” Gustave Kerker, Music Director. I then learned that not only were women in that era not permitted to play in orchestras, but that a woman playing a violin in public was considered improper—even scandalous! Victorians considered the way a woman’s body moved while playing the violin “far too sensuous” for mixed company, and they also considered women too genteel and delicate for the rigors of an orchestra. (Oh ye of little faith!)

Where will your writing take you next?

Join Tamera on a quick tour of Belle Meade Plantation, the setting of her Belle Meade novels…