Historical author Sarah Sundin kicks off her Sunrise at Normandy series with The Sea Before Us. (Revell). In this World War II romance, an American naval officer must work closely with a member of the Women’s Royal Naval Service. As they grow closer, he fears his efforts to win the war will destroy everything she has ever loved. In this interview, Sarah tells FamilyFiction more about the series, what got her interested in writing fiction set during WWII, and learning to trust that God is in control…

Sarah, would you please tell us about The Sea Before Us? 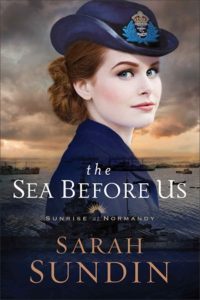 In the Sunrise at Normandy series, the three estranged Paxton brothers fight on D-day—from the sea, in the air, and on the ground. The Sea Before Us is naval officer Lt. Wyatt Paxton’s story.

In 1944, Wyatt arrives in London to prepare for the Allied invasion of France, determined to redeem himself with the brothers he has betrayed. Dorothy Fairfax serves as a “Wren” in the Women’s Royal Naval Service, striving for the love of her bereaved father and of the man she’s always adored.

Wyatt and Dorothy work together on plans for D-day. But will family secrets, misplaced affections—and the seas off Normandy—separate them forever?

How did you become interested in the World War II period?

Family stories piqued my interest from a young age. My grandfather was a pharmacist’s mate—medic—in the Navy, my great-uncle was a B-17 pilot, and my grandmothers held down the home front.

They were all storytellers, so I was blessed. The difficulties of the war helped shape them into strong and resilient people—people I long to be like.

What type of research was required for writing about D-day and the invasion of Normandy?

Plenty! To learn about the naval action off Omaha Beach, I read the action reports and war diaries of the American destroyers that served in that sector on D-day. For Dorothy’s story, I read about the Wrens, including oral histories of some of the British ladies who served in the Royal Navy.

On the lighter side, I learned how to make a proper English pot of tea, found a recipe for Lord Woolton Pie, and discovered that colored pencils had been invented before World War II but weren’t manufactured in Britain during the war.

Are there any lessons that you hope readers can learn from The Sea Before Us? 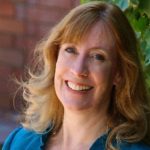 In the story, Wyatt tells Dorothy, “When times are dark, it’s hard to see the light, but it doesn’t mean the light is less real.” Both are dealing with very dark times—war, air raids, shortages, and family crises—but Wyatt concentrates on the light and leans on God.

I hope readers will learn along with Dorothy that God’s light is present at all times. As Psalm 139:9–10 says, If I…dwell in the uttermost parts of the sea; Even there…thy right hand shall hold me.

Both Wyatt and Dorothy long to protect those they love, but find it isn’t always possible or even good. When does this urge to protect become a problem?

I’m always amazed how God draws parallels between my life and my novels. While writing this story, I was adjusting to the empty nest as our youngest son joined the Navy and was deployed overseas. As a mom, I want to protect my children and hold them tight in my hands.

In The Sea Before Us, Dorothy longs to protect her grieving father and Wyatt wants to protect his family and Dorothy too. But they each come to see that control is an illusion—their loved ones are in the Lord’s hands, not theirs. While we must provide reasonable protections for those we love, we also need to trust them in God’s hands, remembering He loves them even more than we do.

The Sea Before Us
Sunrise at Normandy #1
Sarah Sundin
Revell