Pat Jeanne Davis’ longtime interest in the WWII era goes back to the real-life stories she heard about family members who served during the war. Through reading letters her father-in-law sent home, Pat was able to immerse herself into the world of a homesick soldier longing to be home with his bride. Her debut novel is the wartime romance When Valleys Bloom Again (Elk Lake Publishing): As war approaches in 1939, Abby Stapleton’s British diplomat father insists she go back to America until the danger passes. She never expected to fall in love with an American—or have to confront a rejected suitor determined to ruin her reputation and destroy her faith in God’s providence. In this exclusive interview, Pat explains the real-life incidents that inspired her story, shares why she wants to highlight the lives of those who served, and reveals the faith message behind the novel…

What inspired the story in When Valleys Bloom Again? 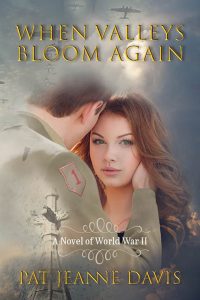 The opening for my WWII inspirational romance was conceived after reading a biography on the life of Kathleen Kennedy, daughter of Joseph P. Kennedy, the United States Ambassador to the United Kingdom. He and his family were living in London when Britain declared war.

Kathleen Kennedy’s story intrigued me. She was forced by her father to return to the U.S. for her safety. Kathleen had made many friends while living in London and was determined to return some day. She eventually did go back, served in the British Red Cross, and married William Cavendish who was in line to become the next Duke of Devonshire.

I based my protagonist, Abby Stapleton, loosely on Kathleen Kennedy’s situation at the outbreak of war in 1939. However, in this story Abby is the American-born daughter of a British diplomat. Her father sends her back to the U.S. to escape impending war. She too vows to return to London.

What does it take to research the period for When Valleys Bloom Again?

I read books and saw many films set in the World War II era. On trips to England with my British husband I combined visiting family there with research for my story.

I visited an actual air raid shelter in Stockport, Imperial War Museum in Manchester, Duxford Aerodrome in Cambridgeshire, the Churchill War Rooms in London and Chatsworth House in Devonshire. I also interviewed veterans of WWII in both the U.K. and the U.S.

What were your goals writing this novel? 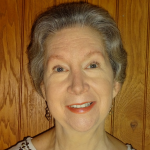 I’m a confirmed Anglophile living near many magnificent estates along the Philadelphia Main Line. I wanted to write an Anglo-American story around the dark days of WWII, setting a portion in my area and also in Britain. A story that offers inspiration and hope.

There is continued interest in the World War II era evidenced by numerous current books and films. As the ranks of those who lived through this period get smaller, I wanted to highlight their lives in an instructive and entertaining way. Some of their experiences inform the context of When Valleys Bloom Again.

What do you want readers to take away after reading When Valleys Bloom Again?

For those who love the Lord, all things work together for good. That with faith in Christ and submission to God’s will, we can be hopeful and steadfast in purpose during times of external and internal conflict. That ultimately good will prevail over evil. I hope readers will connect with the faith message in this story. That they will root for Abby and Jim and will be surprised by the twists in the plot.

What are the challenges (or benefits) of writing “romances” as a Christian author?

In a world that places so much value on the material and the external, I seek as a Christian author to give God preeminence by weaving Him into my story. In When Valleys Bloom Again, I show how a couple from a different social class fall in love and grow in step with God’s plan for them as they live through the trauma of war on the home front and the battlefield. Abby and Jim are drawn together and changed by this event, while their relationship grows in depth and beauty.