Historical romance author Kristi Ann Hunter continues to draw readers into her Regency-Era romances with endearing characters, delightful romance and her witty writing style. She continues her Hawthorne House series with An Uncommon Courtship (Bethany House). In this Q&A, Kristi talks about the book, how it fits in with the other titles, and how the spiritual elements of this story are different from the others in the Hawthorne House series… 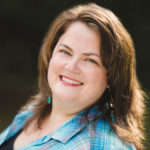 This book has an unusual beginning for a romance novel. Why did you choose to start it that way?

On page one, we find ourselves at the wedding breakfast of the hero and heroine. The vows are already completed and Lord Trent, whom many readers have gotten to know in the rest of the series, is suddenly married. I started it this way because I wanted it to be a bit of a shock for the readers, just like the marriage was a shock for Trent and Adelaide.

How does An Uncommon Courtship fit in with the rest of the Hawthorne House series?

Lord Trent is the younger son of the Hawthorne siblings. He’s taken his family role seriously in the previous books, but he’s never truly had to take on any responsibility until now. Readers of the free e-novella A Lady of Esteem may recognize Lady Adelaide’s family. She is the forgotten daughter of Lady Crampton. After spending a life overshadowed by her ambitious sister, Lady Helena, she finds herself forced to suddenly decide for herself what she wants in life. Several other characters will also be familiar to readers of the novella, since Trent is now living in Amelia’s old house. 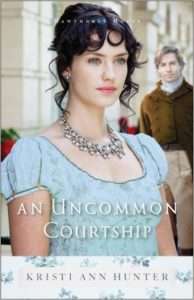 What aspects of the story were more difficult to handle?

A married couple, particularly a married couple in the early 1800s, has a very different relationship than an unmarried couple, yet at the same time, Trent and Adelaide are faced with all of the same problems that a new couple would have outside of marriage. They don’t know each other and don’t know what the other likes, feels or thinks; yet, at the same time, they are living together and forced to face the expectations of everyone outside the marriage. Finding the balance between being married and being strangers was an interesting aspect of the story to explore. At times, the hero and heroine turned into their own villains as they, too, tried to find their footing in an out-of-balance situation.

How are the spiritual elements of this story different from the other ones in the series?

An Uncommon Courtship focuses a good bit more on godly relationships and how those impact your personal walk with God than some of the other books. There are scenes I particularly love where a group of God-honoring men gather together to help each other follow God more closely. Trent and Adelaide especially find themselves struggling in their marriage until they realize they need to bring God into the relationship as well.