Sarah Sundin is the bestselling author of When Twilight Breaks and several popular WWII Christian fiction series, including Sunrise at Normandy, Waves of Freedom, Wings of the Nightingale, and Wings of Glory. Her novels have received starred reviews from Booklist, Library Journal, and Publishers Weekly, as well as the Carol Award, the FHL Reader’s Choice Award, and multiple appearances on Booklist’s “101 Best Romance Novels of the Last 10 Years.”

In this interview Sarah talks about her new book, Until Leaves Fall in Paris.

FF: Can you please provide a brief description of your new novel, Until Leaves Fall in Paris?
The novel follows two Americans living in Nazi-occupied Paris in 1941. Former ballerina Lucie Girard is an artsy Left Bank bookstore owner who aids the resistance, while practical Right Bank businessman Paul Aubrey passes information on the Germans to the US Army and uses his automobile factory to hide escaping RAF airmen. Although Paul is intrigued by Lucie, to gain her trust and affection would mean revealing his secrets—and that would put them both in danger.

FF: Until Leaves Fall in Paris is based on real life events. Can you please provide a little more information on the backstory behind your new novel?
When I learned that thousands of American citizens remained in Paris after the Nazis conquered France, I was fascinated. Why would anyone from a neutral nation like the USA remain when they had the ability to leave? The answers are as varied as the people who stayed—business, artistic, and family concerns topped the list, along with the sense that Paris was their true home.

Paul Aubrey is typical of the many American businessmen who remained—America was neutral, so they could still conduct business. Lucie and Green Leaf Books are loosely based on Sylvia Beach and her famous bookstore, Shakespeare and Company, which served as a center for the American expatriate community in the 1920s. What amazed me was how Miss Beach chose to remain in Paris as the Nazis bore down and how she kept her bookstore open until December 1941! That kind of plucky courage was just what I wanted in my novel’s heroine.

FF: In order to aid the US in the war efforts, the main protagonist, Paul Aubrey, is viewed as a collaborator. What does this mean and what did this entail?
A collaborator was a man or woman who worked closely with the German occupiers, whether in business or in personal relationships. The story of France in World War II is complex and nuanced, with a spectrum of behavior from active resistance to passive resistance to quiet accommodation to active collaboration—and that spectrum was seen among the American expatriates as well. In general, collaborators were despised or at least distrusted by many. Since Paul Aubrey’s factory sells delivery trucks to the Germans, he is seen as an active collaborator. He allows others to think the worst of him in order to secretly aid his country—but it comes at a high personal cost.

FF: In the 1940s when Germany first conquered France, Americans were treated well. But this all changed on December 11, 1941. Can you please relay the circumstances that took place on this day?
On December 11, 1941, four days after the Japanese attack on Pearl Harbor, Germany declared war on the United States. The US reciprocated. That same day, all American citizens in occupied France were required to register with their local German commander, and 340 men were ordered to report for internment on December 17. Starting on September 24, 1942, a further 1400 US citizens, men and women ages 16–65, were interned. They were imprisoned in hotels or military-type camps in unpleasant conditions—but nowhere near the brutality and deprivation seen in German concentration camps.

How does this event tie into your story?
This event provides a major thread of tension in the story. Since British citizens were interned, Americans knew they would probably also be interned if America entered the war. And everything that happened in 1941 hurtled America closer and closer to war. With Paul and Lucie deeply involved in resistance activities, they can’t afford to be interned.

FF: What type of research was required to learn about the French resistance and the many unique ways that both the French and American expats participated in this resistance?
Researching a new aspect of the war always energizes me. While I had a good deal of general knowledge of France in the war, I had a lot to learn—and I found a lot of amazing resources. I read quite a few books about occupied Paris to come at the subject from different angles, plus books about Americans in Paris, the French resistance, cultural life under the occupation, and more. Sadly, my research trip was canceled due to COVID, but I’ve been privileged to visit Paris in the past, so I was able to draw on memories.

FF: World War II affected so many countries. Why did you choose to set your novel in France?
Paris, as one of the most beautiful and romantic cities in the world, is a perennially popular setting for novels. Also, the shock of the City of Light coming under darkness and the courage of those who dared to fight back against the darkness is a story that continues to resonate with readers. I wanted a fresh angle, and found it by focusing on two Americans from very different backgrounds.

FF: What do you hope readers will experience when reading Until Leaves Fall in Paris?
First, I hope they experience an exciting and romantic tale in a glorious setting. But I also hope the story helps readers think about when to speak up, when to act, and when to take risks. In addition, I hope they enjoy Paul and Lucie’s discussions about arts and creativity versus business and science—and how they learn from each other.

FF: What are you working on next?
I’m very excited about my next novel, set in Copenhagen, Denmark. When the Nazis occupy Denmark, Baron Henrik Ahlefeldt is ashamed of his dissolute life. Inspired by Copenhagen’s Little Mermaid statue, he exchanges his voice for legs. He assumes the identity of Hemming Andersen, takes a job in a shipyard, and rows messages across the Øresund to Sweden for the resistance. American Else Jensen is determined to continue her studies with famous Danish physicist Niels Bohr—work that means more to her than freedom. In 1943 she begins using university equipment to print resistance newspapers and hears stories of the movement’s legendary Havmand—the merman. Living in the same boardinghouse, Else suspects there’s more to Hemming, but his silence is impenetrable. When the Nazis crack down on the Danes, will there be more power in Henrik’s silence or Else’s speech?

Book Summary:
As the Nazis march toward Paris in 1940, American ballerina Lucie Girard buys her favorite English-language bookstore to allow the Jewish owners to escape. Lucie struggles to run Green Leaf Books due to oppressive German laws and harsh conditions, but she finds a way to aid the resistance by passing secret messages between the pages of her books.

Widower Paul Aubrey wants nothing more than to return to the States with his little girl, but the US Army convinces him to keep his factory running and obtain military information from his German customers. As the war rages on, Paul offers his own resistance by sabotaging his product and hiding British airmen in his factory. After they meet in the bookstore, Paul and Lucie are drawn to each other, but she rejects him when she discovers he sells to the Germans. And for Paul to win her trust would mean betraying his mission. 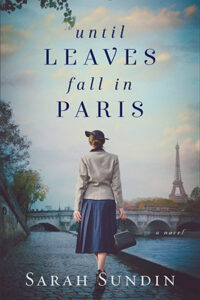 Buy Until Leaves Fall in Paris from the FF Store HERE!

Buy Until Leaves Fall in Paris from Amazon HERE!