Roseanna M. White is a bestselling, Christy Award-nominated Christian fiction author who has long claimed that words are the air she breathes. She pens her novels beneath her Betsy Ross flag, with her Jane Austen action figure watching over her. When not writing fiction, she’s homeschooling her two children, editing and designing, and pretending her house will clean itself. Roseanna is the author of numerous novels, ranging from biblical fiction to American-set romances to Edwardian British series. Roseanna lives with her family in West Virginia.

In this interview, Roseanna shares some of her thoughts regarding her latest novel, Worthy of Legend.

FF: Please provide a brief summary of your new novel Worthy of Legend.
Worthy of Legend takes readers back to the Isles of Scilly off the coast of Cornwall, where our intrepid treasure-hunting friends find themselves looking for nothing less than a lost artifact of King Arthur. Lady Emily Scofield has to finally face down the family who has pitted themselves against her friends in the hunt, and Lord Bram Telford’s protective nature pairs with his fascination with all things King Arthur to make him the perfect hero for this portion of the tale.

FF: Worthy of Legend is the third book in your The Secrets Of The Isles Series, which takes place in the Isles of Scilly. What about the Isles of Scilly first captured your imagination?
Honestly, I chose the setting by Googling “English islands” and then scrolling through pictures until I found ones that made me go, “Ooooo, ahhhh!” They are just so gorgeous! That caught my eye, and then I started reading about them, and I was hooked. They are without question the most interesting and unique setting I’ve ever chosen, and I hope to visit there someday soon.

FF: Can you tell us a little more about what and who were the inspirations behind this book?
I knew that this final installment of the trilogy would be about Emily and Bram, but the inspiration for the particular plot and themes were the usual hodgepodge of things that were happening in my life at the time. The concept for the series itself was inspired partly by my love of the treasure-hunting show Expedition Unknown, though, I confess.

FF: What did you enjoy most about creating a brave and independent protagonist like Lady Emily Scofield? What did you find the most challenging, if anything?
Well, the beauty of Lady Emily is that, like so many of us, she has to discover that she can be brave and independent. I loved diving deep into Emily’s insecurities, but also into her heart as she struggled with learning how to love people who don’t love her as they should…which was definitely a challenge!

FF: Like many of us, your character Bram Sinclair is fascinated by ancient legends and the tales of King Arthur. Why do you think such stories have continued to motivate us even today?
Ah, one of my favorite themes from the book! I think these tales still grab us because they speak to what humankind should be—we should be noble and heroic and gallant and selfless. All too often we’re the opposite, but these tales, whether true or not, teach us about that core of nobility that we should all aspire to and help us to remember that there’s more out there worth fighting for.

FF: Without giving away any spoilers, what makes Bram Sinclair and Emily Scofield such a compelling duo?
Well, Emily is in rather desperate need of a knight in shining armor, and Bram has always wanted to be one. But part of his stated purpose is also to show Em that she doesn’t need him—she’s strong enough on her own.

FF: What makes Worthy of Legend a fitting conclusion to your The Secrets Of The Isles Series?
The ongoing treasure hunt is fully wrapped up, we have that unexpected Arthurian legend, and Prince George finally arrives in the islands too…at the least convenient moment, of course.

FF: What lessons do you hope readers will gain from reading Worthy of Legend?
My hope is that readers come away knowing God sees them. He sees them in their pain, in their joys, in their struggles, and in their triumphs. But I also wanted to explore the fact that He sees our enemies just as clearly and loves them just as much. No matter how unlovable we feel or act, He still gave up everything for love of us…so how can we do anything less?

After a summer of successful pirate-treasure hunting, Lady Emily Scofield and her friends must hide the unprecedented discoveries they’ve made, thanks to the betrayal of her own family. Horrified by her brother, who will stop at nothing to prove himself to their greedy father, Emily is forced to take a stand against her family—even if it means being cut off entirely.

Bram Sinclair, Earl of Telford, is fascinated with tales of King Arthur and the Knights of the Round Table—an interest he’s kept mostly hidden for the last decade. But when a diary is unearthed on the islands that could lead to a secret artifact, Bram is the only one able to piece the legends together.

As Bram and Emily seek out the whereabouts of the hidden artifact, they must dodge her family and a team of archaeologists. In a race against time, it is up to them to decide what makes a hero worthy of legend. Is it fighting valiantly to claim the treasure…or sacrificing everything in the name of selfless love? 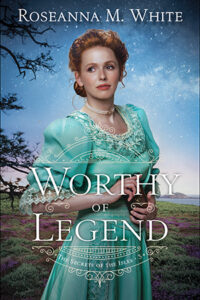 Buy Worthy of Legend from the FF Store HERE!