Grace Hitchcock is the award-winning author of multiple historical novels and novellas. She holds a Masters in Creative Writing and a Bachelor of Arts in English with a minor in History.

In this interview, Grace shares some insights into her new series, Aprons & Veils, with the release of book one, The Finding of Miss Fairfield.

FF: What type of fiction do you write? What is it about this type that appeals to you?
I write historical romance with a dash of suspense, unless it was for my true crime books which have a bit more than a dash of suspense. For my American setting novels, The Gilded Age speaks to me as it was a time of change for women. While still having that epic romance feel with balls and dancing and courtships with a sweet romance, women were breaking ground and making history and pairing that with the fact that it was a time of emerging inventions, it is an all-around exciting era to research, read, and write.

FF: Who were the Harvey Girls?
Whenever I tell people I am writing about a Victorian Harvey Girl romance, they usually assume the Harvey Girls are associated with an old-time saloon, but nothing could be further from the truth. In the 1890s, there were not many respectable jobs for women, so when Englishman Fred Harvey created his chain of fine dining restaurants along the Atchison, Topeka, and Santa Fe railroads, single women without an education, or in need of earning their own way, were given a chance to earn an honest wage without the speculation that they offered anything else but food as a service. With Mr. Harvey’s strict rules about the waitress’s code of conduct, the women were given their independence while still maintaining their good name and place in society under the protective, fatherly arm of Fred Harvey. These extraordinary, brave women became known as the Harvey Girls, the ladies who tamed the Wild West with fine china, good pie, and exceptional service with complete propriety.

While Harvey Houses were built to serve the needs of the passengers on the rail to encourage tourism in the west, the railroad workers and local townsmen also dined at the restaurant, but usually at the lunch counter. At a time when men filled towns and women were scarce, inevitably, a railroad worker or townsman would express interest in marrying a Harvey Girl. In order to marry, she would need to fulfill her work contract or risk paying a fine of a month of salary. The fine was set in place to ensure that Fred Harvey would have enough workers and that he wouldn’t simply train a girl to have her shipped to a town of bachelors and leave him without a waitress.

As you can probably tell, such a set up sends an author’s head to spinning with all the romance that could come from a woman venturing out on her own in a land filled with cowboys, bandits, ranchers, and farmers. The possibilities for romance are endless! There is so much more I could write about these fascinating ladies and their contributions to society, but I hope you enjoyed this taste of history on the Harvey Girls!

My latest release, His Delightful Lady Delia, concludes my 3-book American Royalty Series for Bethany House Publishers and hit the shelves in November 2022.
This spring, I signed with Kregel Publications for my first ever REGENCY series!!!! I am thrilled for this dream come true!

While I wait for its release, I’m keeping busy editing and writing book two in my Harvey Girls Aprons & Veils Series, The Pursuit of Miss Parish.

The Pursuit of Miss Parish summary:
Love’s gentle promise becomes nothing more than a withered dream.

With dreams of love and a hope for belonging, shy Belle Parish leaves her position as a maid in Charleston to travel to New Mexico with her best friend to become mail-order brides. Colt Lawson’s letters hold great promise and while his devilishly handsome face matches his picture, something does not add up. Discovering his lie only moments before they wed, Belle flees the church and straight into the Castañeda Hotel Harvey House. Giving up the prospect on ever marrying, she dons her nun-like uniform and focuses on her role as a Harvey Girl waitress until a strong, former Texas Ranger rides into her life.

Colt Lawson didn’t want to send that letter to Belle Parish in the first place, but her first response had all but captured his heart. When he is left standing at the altar alone, he is left with two choices—either release his dream of a love marriage, or attempt to win her heart. Wooing her would be a lot easier if that Texas Ranger wasn’t back in town. Who wants a dusty rancher with a past when she could have a shining knight in a Stetson?

Book Summary:
When an engagement of convenience becomes anything but convenient…

Forced into a betrothal with a widower twice her age, Charleston socialite, Sophia Fairfield is desperate for an escape. But, while her fiancé is away on business, he assigns his handsome stepson, Carver, the task of looking after his bride-to-be. Much to her dismay, Sophia finds herself falling in love with the wrong gentleman—a man society would never allow her to marry, given Sophia was supposed to be his new stepmother. The only way to save Carver from scandal and financial ruin is to run away, leaving him and all else behind to become a Harvey Girl waitress at the Castañeda Hotel in New Mexico.

Carver Ashton has had his life planned out for him since birth, but when he encounters Sophia Fairfield, he glimpses a new life—apart from his overbearing stepfather’s business. But, when the woman he loves disappears before he can express his devotion, Carver abandons all to find her. However, his stepfather has other intentions for Sophia and will stop at nothing until she is his bride…even if it is against her will. 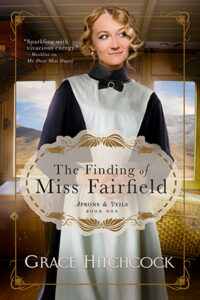 Buy The Finding of Miss Fairfield from Amazon HERE!