Tracie Peterson is the bestselling, award-winning author of more than one hundred books. The Way of Love (Bethany House) is book two in her historical romance series, Willamette Brides. Faith Kenner is pursuing her dream to become a doctor at medical college so she can use her gift for healing to help those in need—especially the native populations forced onto reservations and then neglected. When she’s caught in the middle of a plot to push the local Indian tribes to rebel, can she and handsome riverboat captain Andrew Gratton trust that God has a way toward love for them? Or will her secret stand in the way of their one chance for true happiness? In our exclusive interview, Tracie explains how her series examines the prejudices and racism of the 1880s, sets the scene of the second story for us, and shares the sad surprises she found in her research.

The Way of Love is the second book in your Willamette Brides series. Can you give us an overview of what you wanted to explore through this series?

It seems especially relevant because of what we’re going through now in our country, but I wanted to share a series that exposed the prejudices of the 1880s. I had visited a museum in Oregon and came to learn that at one time it was illegal for blacks to come to Oregon and take up residence.

In one situation, a family brought a former slave who had been with them all her life. They built a hidden box under the wagon where she rode all the way to Oregon. She could only get out at night, and then only if it was safe from others seeing her. I knew I wanted to include that in a story.

In The Way of Love there is a lot going on with racial injustice and besides the situation of it being illegal for African Americans to be in Oregon (although a lot wasn’t done to enforce it once they were there) there was also the issue of dealing with the Native Americans and the horrible conditions they lived under. I wanted to draw on these things throughout the series and show there truly is nothing new under the sun.

Tell us a little about Faith and the period the story is set.

Faith first appeared in the Heart Of The Frontier series. Her mother was violated during the Whitman Mission Massacre. Her mother was a fictional character, but the history and research showed that many of the women who survived the Whitman event were “forced to become wives to the Indian attackers.”

Faith is given to friends to raise but ends up back with her real mother after their death. Now in The Way of Love, Faith is thirty and has been a healer and midwife all of her life. When the college allows for women to study medicine, she jumps at the change to attend and get a certificate that she believes will earn her the right to practice medicine and surgery alongside men.

She has hidden her Native American heritage all of her life and wrestled with the truth. Is she lying by only being open about her white ancestry? Faith has always wanted to be a wife and mother, but she knows the law that will keep her from marrying anyone white, and as a white woman she’d be shamed and ostracized if she married a Native American man. So her entire life is a dichotomy.

Faith is studying to be a doctor. Did you discover any particular challenges for women studying medicine at this time?

There were so many conflicts and challenges for women in the 1880s. There was still a strong feeling that women were too delicate and dim-witted to be able to focus on medical knowledge.

The men figured they’d faint at the first sight of injuries and fatal situations. Never mind that it was usually the womenfolk in the family who helped each other deliver babies, sewed up gashes their men got while working, and treated terminally ill family members.

Women were already doing many of the surgeries and healing treatments in their family, and now they were finally being allowed to take it one step further by getting a degree or certification. They had a real battle, however, getting others to accept them and often weren’t ever accepted and went into research instead.

Faith is concerned about using her new skills to help the native populations living in the nearby reservations. What inspired this angle of the story? Did you base any parts of the novel on actual events?

I had read various stories about the poor conditions of the reservations as a whole. The government seemed less concerned about the health of the Native Americans and often hired uneducated men who called themselves doctors to treat the people living on the reservations.

I truly believe given the attitude of the day, they hoped the native people would die off and no longer be a concern. There was a negative attitude toward any white woman being allowed to even live near the reservation, much less on it.

As a time of awakening to the injustices of what was actually happening to the Native American in the 1880s, many women like Helen Hunt Jackson and others took to lecturing about the problems. Helen Hunt Jackson even wrote a book titled, A Century of Dishonor which she sent to each and every congressman of the day. It dealt with seven different native tribes and how poorly they had been treated and what she believed needed to be done about it.

People who wanted to help the Native Americans were labeled “Indian lovers” and often shunned by their own families and neighbors. My fictional character Faith has to live daily with being white and Indian and the problems the world has for her related to both sides.

As you wrote this novel, was there any part that surprised you?

I think the thing that surprised me the most were some of the laws that were on the books and verbiage of such laws that didn’t get changed until the twenty-first century. I share information at the back of books two and three regarding those laws because I want to reader to understand how truly biased men and women could be at that time and the power those laws had when fear was injected into the situation.

I hope the series will give the reader pause for thought and as always draw them closer to God. Thanks for the opportunity to share my thoughts behind the story. 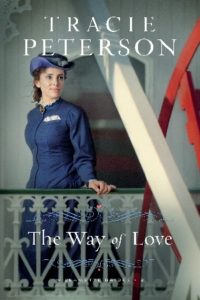 Buy The Way of Love in our store HERE!