Ashleigh boards the ill-fated Lusitania with hopes of a fresh start abroad, but will she carry with her the bitterness and pain she is trying so hard to outrun? Pepper Basham’s historical romance series Penned in Time (Vinspire Publishing) has garnered major praise and is nominated for a 2017 INSPY Award. Pepper answered our top questions about her inspiration behind the series, her writing challenges, and research. 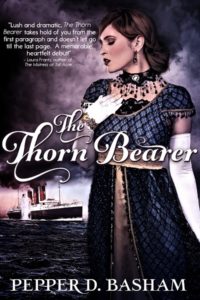 WHAT WAS THE INSPIRATION DRIVING THE PENNED IN TIME SERIES?

The Penned in Time series didn’t start as a series, but as one story that bloomed into a series. At the same time I discovered the historical event of the sinking of the Lusitania, a friend of mine shared her personal story of forgiveness of sexual abuse. Somehow, God used the two, along with some personal understanding of my own, to create The Thorn Bearer – and, since I have such a hard time thinking in single titles – the characters begin to expand into stories of their own.

By the time the Penned in Time series was born, I realized each book somehow addresses forgiveness. In The Thorn Bearer – it’s forgiveness of others. 2. It’s forgiveness of self. and 3. It’s “forgiveness” of God (or the god she’d expected him to be instead of realizing even suffering is an act of God’s love.

I’m so proud of the stories of grace that flow from this series.

WHAT DOES IT TAKE TO RESEARCH THE PERIOD WHEN THE THORN HEALER (BOOK 3 IN THE SERIES) TAKES PLACE?

Well, in my opinion story comes first and then the added historical research comes next. If I have a good ‘story’ then enriching the story with fact and era serves to make the story even better. My research for this story was actually pretty awesome because Hot Springs, NC is only about 45 minutes from my house so I got the chance, more than once, to go to the actual site.

So many people from Hot Springs were helpful in giving more detailed information, including the author of the book that introduced me to WW1 era Germans in Hot Springs by Jacqueline Painter entitled The German Invasion of Hot Springs. Lots of internet searches for fashion and medical information – as well as watching videos and reading books were all parts of the research process – but visiting the actual area was my favorite.

WHAT WAS THE MOST CHALLENGING PART OF WRITING IT?

My heroine Jessica Ross is not like me. She’s direct, a little abrasive, and harboring a mountain-sized grudge. It’s almost like she kept ME out like she was trying to keep the characters out in the story, so breaking through her personality to write her was probably the most challenging part of The Thorn Healer. Does that just sound weird, or does it make sense?

WHAT ARE THE PROS AND CONS OF WRITING CONTEMPORARY VS. HISTORICAL ROMANCE?

In all honesty, I can only think of pros! I LOVE LOVE switching genres and I think it’s because I’ve always written in different genres so it feels ‘weird’ to only stick with one. I can if I need to (deadline-induced), but I find my creativity is better when I have two projects going at the same time and when I’m stuck on one, I can do an entire mind-switch to another and work a while until the muse hits again.

I think the main challenge is trying to keep the styles separate. Story creating is the same for both, but one ‘sounds’ different than the other, so keeping that distinctive can sometimes prove a little challenging.

WHAT DO YOU WANT THE READER TO TAKE AWAY AFTER READING THE THORN HEALER?

Oh my goodness, there are so many things! The Thorn Healer is a story, ultimately, of love conquering all, even our bitterness and prejudice. I think there are also hard lessons about God’s sovereignty in suffering. But at the heart of the story is the power of God’s love to break through the greatest wounds, strongest bias, and hardest hearts, to rescue us…even from ourselves.