Acclaimed fantasy author Patrick Carr turns his attention toward historical fiction for the epic biblical novel The End of the Magi (Bethany House). A fast-paced and action-packed journey of the last of the magi, the novel offers a unique look into the true history of the magi—from the historical underpinnings in the book of Daniel to their arrival in Bethlehem. In this exclusive interview, Patrick shares what inspired him to write the novel, how fantastic the historical details really were, and how he struck a balance between accuracy and imagination…

Patrick, what can you tell us about The End of the Magi? 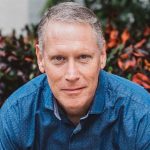 The End of the Magi is a biblical historical novel about the magi and how they came to be in Bethlehem and what happened to them afterward. What’s really interesting here is that we see them for a few verses in Matthew where the subtext is frightfully tense and then they disappear as mysteriously as they appear.

We know that they came from the east guided by a star and that after encountering the Messiah they return to their own country, but most of us don’t have any idea of what that country was or, more importantly, how the magi knew to come to Bethlehem in the first place. There are all these hints, but nothing definitive.

The End of the Magi is a serious attempt, in novel form, to bring all the hints together into a plausible narrative.

The novel has a kind of fantastical sheen about it. Tell us the balance between that and historical fiction.

Actually, I would classify this novel as straight-up historical fiction. My joke to my wife is that everything in the novel is real except for the parts that aren’t. I invested a lot, and I mean a whole lot, of time in getting the history of the time correct, especially those detail that have to do with the Parthian Empire, Rome’s rival to the east of Israel.

What’s going to amaze most readers is that the more “fantastic” portions of the story are those that are lifted straight from the pages of history. Which of course just goes to show that fact is often stranger than fiction.

How much of this novel is speculation or imagined vs what’s available in the biblical/historical record?

At every step of the story I endeavored to be as biblically and historically accurate as possible. In fact, when it came time to edit the story, we always erred in favor of accuracy as opposed to speculation. If the account in the Bible said the event took place a certain way, that’s how we portrayed it.

That being said, this is a work of fiction, but it’s as close to Bible and history as we could get it. I think Ben Hur and The Ten Commandments offer a good comparison. Those stories are fictional, but they stick to the biblical/historical record whenever those elements are encountered in the story.

What inspired you to write this tale?

I was listening to a study on tape by a scholar named Chuck Missler, who founded Koinonia House in Idaho. This was back in the early to mid ’90s, I think. Anyway, his explanation of the origins of the magi totally exploded in my mind and I kept wondering what that must have looked like historically.

The idea gestated in my head for a couple of decades, After I finished The Darkwater Saga, I decided to do some research and see if I could put some characters into the historical narrative.

What do you hope readers come away with after reading The End of the Magi?

I hope they come away with the sense that the birth of Christ wasn’t just this small localized event, but that it took place in a time of sweeping historical events that affected whole empires. We usually associate that impact with his death and resurrection, but if we look at the record, his birth tilted the empires of the world on their axes and served notice that God had come and nothing would ever be the same. 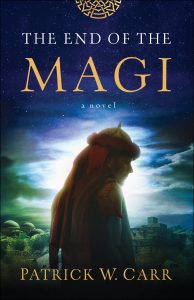 The End of the Magi
Patrick W. Carr
Bethany House

Buy it from our store!