Regency romance fans eagerly await each new Regency romance from Kristi Ann Hunter. Her delightful and romantic stories continue to grow her fan base with each new release set in the popular early-1800s British period. Her latest novel is A Return of Devotion (Bethany House), the second volume of her Haven Manor series: Daphne Blakemoor was perfectly happy living in her own secluded world for twelve years. William, Marquis of Chemsford’s main goal in life is to be the exact opposite of his father. They’ve spent their lives hiding from the past—can they find the courage to face their deepest wounds and, perhaps, find a new path for the future together? In this interview, the author explains what sets her heroine apart, which interesting historical tidbits she discovered, and what our modern age has in common with the Regency era…

How does A Return of Devotion fit into the Haven Manor series? 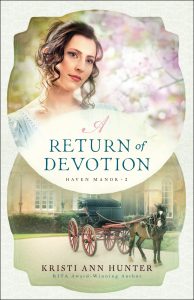 A Return of Devotion begins a few weeks after the end of A Defense of Honor. Everything is changing and the people of Haven Manor are learning where they fit in this new world.

The problem for Daphne is that her past has suddenly become part of her present. William is unaware of his connection to Daphne’s past, which leads to a hilarious tangle before things can become unraveled. Setting everything right requires her to face everything that sent her running to Haven Manor in the first place.

What makes Daphne different from your other heroines?

I’ve always loved a strong heroine, but Daphne is strong in a different way. She has social anxiety, and putting herself in front of people terrifies her. She’ll do it, though, for the people she cares about. She’s not the wittiest woman I’ve ever written, but there’s a clumsy charm to her that I find adorable and endearing.

She loves the quiet country life, which makes the idea of marrying a marquis and taking on the social demands that come along with such a relationship more than a little terrifying.

Did you come across any particularly interesting historical tidbits when writing this book?

One of the most fascinating things I came across was the idea of dame schools. This was essentially early nineteenth century daycare for the children of women that had to go to work to support their families.

With the increase of factories and an increase of widows after the war, more women were taking on jobs, which meant more women needed safe places for their children to go while they worked. Dame schools became the answer.

The Regency era isn’t often known as a particularly religious time period. How do you reconcile that with a book that would appeal to today’s Christian readers? 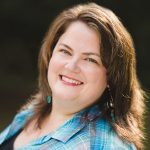 People’s views of the church, God, and personal relationships with Christ were undergoing a major shift during this time, making it a great backdrop against which to explore Christian thinking. Despite the dominance of the Anglican church, Methodists and Baptists were gaining new members quickly, something the government was forced to address by creating laws allowing people to attend churches that didn’t align with Anglican theology (such as Roman Catholic and Presbyterian).

Thoughts and views were changing, paving the way for some of the evangelical greats of the Victorian era, such as D.L. Moody, who traveled to England from America, and Charles Spurgeon.

At the same time, a spirit of secularism was rising as well, in part due to the decadence of the Prince Regent and a state-run church. This broadening rift between two ways of thinking is something today’s Christian readers can definitely relate to.

How does forgiveness play into the spiritual themes of A Return of Devotion?

Daphne and William are both trying to escape the past, both things they’ve done and things others have done to them. While both of them accepted God’s forgiveness long ago, neither had quite learned how to allow themselves to live a full life after that forgiveness.

The abundant life God had promised was being buried under a load of guilt they both have to let go of if they want to move forward.