Julie Klassen loves all things Jane—Jane Eyre and Jane Austen. Her books have sold more than a million copies, and she’s a three-time recipient of the Christy Award for Historical Romance.

Her latest book is the historical romance An Ivy Hill Christmas: A Tales from Ivy Hill Novella (Bethany House). Spend a festive Christmas in the English village of Ivy Hill, as divine hope, friendship, and unexpected romance work their magic!

In this interview, Julie talks about what inspired the tale, what makes her protagonist special, and her surprising pick for her favorite character in the novella.

What inspired the story in An Ivy Hill Christmas?

I have long considered writing a Christmas novel of some sort and after writing a series of three books set in the quaint village of Ivy Hill, I was eager to return there to visit favorite characters and introduce new ones. My research into early 19th century British Christmas traditions also inspired several scenes.

Tell us about Richard Brockwell, the protagonist of An Ivy Hill Christmas.

Richard is the younger, prodigal son of the Brockwell family. A confirmed bachelor, he goes home for Christmas only because his mother is threatening to cut the purse strings, but he is determined to return to his unencumbered bachelor life in London just as soon as the festivities are over. His plans go awry when he encounters an orphaned apprentice, the first love he disappointed years ago, and Arabella Awdry, a young lady who is far more appealing than he recalled . . . and determined to have nothing to do with him.

Richard had a few unforeseen surprises when he returned home. Did any of the characters surprise you as you wrote them?

Yes, although Richard begins the novel as something of a cynical Scrooge, he is also charming, funny, self-deprecating, and shadowed by a family secret as well as his own past mistakes. I was surprised by how much I came to like Richard and I hope readers do, too.

Who is your favorite character in this novella and why?

Besides Richard Brockwell, I am also fond of his crusty, old valet who isn’t afraid to speak the truth or get in a well-deserved jab now and again. He makes me laugh even as he urges Richard to become a better man.

What would you like readers to take away after reading an Ivy Hill Christmas?

I would love it if readers took away a renewed appreciation for the true joys of this life that have the power to change hearts at Christmastime and all year through: friendship, family, love, and the hope that is found in Christ alone. Happy Christmas! 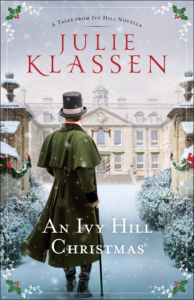 An Ivy Hill Christmas: A Tales from Ivy Hill Novella
Julie Klassen
Bethany House
Buy the book from our store!