Jody Hedlund is the bestselling author of many historical novels for both adults and teens and is the winner of numerous awards including the Christy Award, Carol Award, and Christian Book Award.

In A Bride of Convenience (Bethany House), the third book in Jody’s series The Bride Ships, unemployed mill worker Zoe Hart accepts a proposal from a miner of questionable character named Abe Merivale after he promises to help her locate her brother. After a hasty wedding, they soon realize their marriage of convenience is not so convenient after all.

In this interview, the author shares the real-life events fueling the series, why she chose this particular setting, and the real historical figure who inspired one of the characters.

What is the inspiration behind your bride-ship series?

During the course of my research, I came across information regarding bride ships to the Pacific Northwest. While I’d heard stories of bride ships leaving England and sailing to Australia, I’d never heard of efforts to send brides elsewhere.

As I explored the concept further, I discovered that in the 1860s several bride ships left England’s shores for Vancouver Island and British Columbia, which at that time were both separate colonies of England and not yet part of Canada.

I was utterly horrified and fascinated by the idea that women would willingly board ships, leave everything they’d ever known behind, and sail to a strange land, all for the purpose of marrying complete strangers. I couldn’t help but ask myself what kind of woman would do such a thing and why. This series is my attempt to answer those questions.

Why did you choose Vancouver Island and British Columbia as the setting for this series?

The colony was overflowing with male settlers, primarily because of the 1859 gold rush that had occurred in the Canadian Rockies and lasted for many years. As a result, miners and those hoping to profit from the gold rush swelled into Vancouver Island and British Columbia, creating an influx of male settlers.

An 1861 census showed that females only made up 11-percent of the population there. With so few women available, men who wanted wives had slim pickings. One minister in British Columbia wrote to his supporters, “Dozens of men have told me they would gladly marry if they could.”

Who was behind the idea of sending English brides to the colonies?

With the men complaining about the lack of women, an Anglican missionary among the miners of British Columbia—Reverend Lundin Brown—was the one to write a letter to his sponsors in London, asking for Christian wives for the miners. As a result, the Columbia Mission Society formed an emigration committee and soon began arranging for the transportation of reputable women to come and marry the men and, in so doing, create families and bring stability to the wilderness towns.

What kinds of women decided to board the Robert Lowe (the second bride ship)?

In A Bride of Convenience, my hope is to show the perspective of one of the brides who came on the second bride ship that sailed to Victoria. This ship, called the Robert Lowe, left approximately four months after the Tynemouth (the bride ship highlighted in the first two books in the series).

While the women aboard the Robert Lowe were also sponsored by the Columbia Emigration Society, a distinct difference existed between the two groups. The group on the first ship came largely from the London area and was comprised of wealthy middleclass women, as well as the poor plucked from orphanages and slums.

The Robert Lowe women, however, were from the cotton manufacturing districts in Manchester, England. The calamity in the midlands was widespread, and tens of thousands of cotton-mill workers suffered from unemployment as a result of the cotton shortage brought about by the American Civil War.

The women chosen to immigrate aboard the Robert Lowe were among the many who’d lost their jobs. In light of the bleak conditions in their homeland, the three dozen Manchester mill girls were happy to be offered the chance at a better life in the colonies, where work and husbands awaited them.

What was it like for the brides when they finally reached British Columbia?

The Robert Lowe arrived in January after three months without any stops. After spending a weekend of rest and quarantine aboard the Robert Lowe, the women were ferried to Victoria aboard a steamship.

Before they could go to shore, however, two ill women were taken to the hospital with what was believed to be consumption or mill fever, an illness common among mill workers. Since those lung ailments can lie dormant, the women may have already had the disease, and the damp sea voyage may have allowed it to progress. Whatever the case, the two women died shortly after arriving in Victoria.

The rest of the brides came ashore to great fanfare. With the arrival of another bride ship, the excitement of the men in the colonies was out of control. With not nearly enough women for all the eager men, the women (like those on the Tynemouth) had to run a gauntlet through mobs hoping to find brides. While the heroine of the book, Zoe, isn’t based on any real person in particular, I did hope to portray the bride-ship experience through the eyes of a mill woman.

Often your stories are inspired by real people. Is there a character in this book that draws inspiration from a real historical figure?

Yes, the hero of the story—Abraham Merivale—was inspired by a pastor who lived in the colonies during this time period. The Anglican Church sent missionaries to the mining towns and camps with the intention of spreading the gospel and maintaining order and civility among the miners. One such missionary was a tall, well-liked preacher by the name of John Sheepshanks—a highly educated man and the son of an upper-class family who’d chosen to volunteer for a period of five years in the colonies without a salary.

John Sheepshanks was a cheerful and resourceful minister whose compassion made him popular among both the miners and the natives. He spent time building relationships by playing ice hockey, spearfishing for salmon, and teaching reading. I modeled Abe around this beloved missionary who showed God’s love wherever he was in the mining districts of British Columbia. 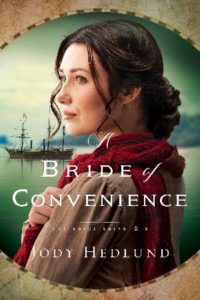 A Bride of Convenience
The Bride Ships #3
Jody Hedlund
Bethany House
Buy the book from our store!