A woman who loves reading and everything about books meets a handsome, mysterious duke, gets married, and falls in love in Regency England. He even gives her a library! How can a story get better than that? In The Gentleman Spy (Kregel Publications), her much-anticipated follow-up to The Lost Lieutenant, Erica Vetsch offers readers a story they won’t be able to resist.

For those who haven’t read The Lost Lieutenant, give us an introduction to Marcus Haverly.

Marcus was such a fun character in The Lost Lieutenant because he always seemed to know more than one would think, pop up when he was needed, and be so comfortable in his own skin. He could move in a variety of circles, both high society and those of lower rank. He was mysterious, intriguing. A handsome stranger who always seemed to be in control of his situation.

I knew that in the second book, I wanted to disturb Marcus. He was much too comfortable in his role in The Lost Lieutenant, and I knew he would need to be pushed out of that to reveal more about his character. Marcus needed to learn that control is an illusion, and that when it comes to dealing with people, relationships can be untidy.

Marcus had his life and path pretty much set as the second son of a duke. What happened that shook up his plans? What are his responsibilities now that he is the duke?

Marcus enjoyed being a second son and had come to peace with not being in the limelight. He had reconciled himself to being second in his parents’ affections and interests too. But when his father and elder brother are killed, and his brother’s child is born a girl, the title falls to Marcus.

He now has the responsibility for an estate, for his father’s and brother’s widows, for bearing the title and taking his seat in the House of Lords, and for participating in his country’s government, in addition to the social obligations that come with being a titleholder.

The trouble is, he doesn’t want any of it. He has his work for the Crown (which is now in jeopardy), his freedom (which his mother is anxious to curtail), and his future (which is totally being undone by the women in his life) tidy and organized.

Being the second son and single meant that no one paid much attention to Marcus’s comings and goings, which was ideal for his life as a spy for the Crown. What did his work as Crown agent entail?

Marcus is involved in both intelligence and operations for the Crown. With England engaged in a protracted war with France, the need for intelligence was great. And the home front was no different. Marcus keeps tabs on various people’s activities.

I created Marcus to be a sort of “eyes and ears” of a fictional branch of the Home Office. He has a network of informants, and he has the ability to go undercover and interact with individuals who are socially distant from the salons and ballrooms of society.

Upon occasion, Marcus has worked as a spy, infiltrating France to gather intelligence, but now that he’s the Duke of Haverly and his actions are scrutinized more closely, he fears his work as a spy is in jeopardy.

Though separated by two hundred years, readers will be sure to relate to your heroine, Lady Charlotte Tiptree. Can you share with us what her obsession is?

Charlotte loves books. She loves all books, but she has a passion for history books and novels. I guess you could say I patterned her a bit after myself since those are two of my passions. Her most precious possessions are the books in her little library, each one saved for, planned for, and loved. It was a joy to write Charlotte because of her pleasure in books—the look, feel, smell, and the words! Oh, the words!

At the time of The Gentleman Spy, Charlotte’s interest lies in ancient history, Greek and Roman to be exact. I always envision Charlotte moving from one historical era to the next to learn as much as she can. She has an insatiable curiosity about the past.

She also loves to escape into a good novel. Because her homelife is less than ideal, she feels safest and happiest when she can fall into the pages of a book and get away from her reality.

Why was it so scandalous for a woman to read books, and especially read a newspaper, during this period in history?

Chivalry and the protection of women were a large part of proper English society during the Regency, and it was feared that too much academic work or exposure to the more, shall we say gritty, elements of life were both improper and could be dangerous to the “weaker female mind.” I’d like to think the men of the era had women’s best interests at heart, or at least thought they did, but I suspect it was because they were afraid of just how smart women are!

Of course, Charlotte thinks this notion that reading is dangerous to women is a load of twaddle, and she reads as much as she can, even though she has to hide her books from her father. When she faces a problem, she turns to books to find the answers. And when she marries, she finds joy in being given run of the house library.

Did any woman from the Regency era get to choose her own spouse? What was the typical courtship process?

They did, within a certain scope. The higher up the social ladder, the more likely that your marriage would be heavily influenced by your parents or guardians. Often a woman took an offer of marriage because she had few other options. The socioeconomics of the Regency era left few choices for an unmarried woman to support herself.

Courtship rituals during the Regency were quite strict and regimented. Chaperones were essential, decorum required, and rules adhered to faithfully. There were rules about when and how to properly speak to someone of the opposite sex, about how many dances you could share at a single event, when and where a courting couple could go. Getting those moves wrong could lead to scandal or censure or a damaged reputation.

What are Charlotte’s views on marriage? How about Marcus?

They both see marriage as a necessary evil, though for different reasons. Charlotte sees marriage as a way to escape her unhappy home, but she fears jumping out of the frying pan and into the fire. She longs for freedom, but the only way to be free of her current life is to suborn her freedom to a husband.

Marcus knows it is his duty to marry, and even his superior officer in the agency encourages him to wed, but he doesn’t want marriage to change him, nor does he want to have to give up anything when he marries. He’s certain that if he chooses correctly, he will find a wife who is content to run his household and bear his children, but who won’t interfere too much with his plans.

A major part of the story involves coming to the aid of women involved in prostitution. That’s not a popular subject in Christian fiction. Tell us more about this aspect of the story and why you decided to make it a part of The Gentleman Spy.

Charlotte discovers early in the story that she has a half sister, the product of her father’s long affair with his mistress, and that both her sister and her sister’s mother have been tossed out to fend for themselves. Her sister, Pippa, makes the difficult choice to become a high-class prostitute in order to survive. Charlotte wants to help her newfound sister and forge a relationship with her, but Pippa doesn’t trust anyone, especially not a half sister who has all the advantages she never had growing up.

Portraying social issues like prostitution in Christian fiction is tricky. The last thing I want to do is write an “issue book” where I’m expounding my views on a particular theme or social situation. I don’t want my story to feel as if I’m standing on a soapbox on a street corner and shouting about how the reader should sit up and take notice of my cause and my views and do something! Any social issue, whether it is the treatment of veterans as in The Lost Lieutenant or the world of prostitution and exploitation of women and the double standards of society as in The Gentleman Spy, must be organic to the story and grow out of the characters’ lives and actions.

As Christians, we cannot be blind to these issues, but for me, as a novelist, the issues must be an integral part of the story I’m writing rather than something inserted with the purpose of preaching to the reader. If one of my stories gets someone thinking about what they could do regarding a social issue, that’s great. But it isn’t the primary reason for writing the story.

What can readers look forward to in the last installment of the series, The Indebted Earl?

Between the release of The Gentleman Spy and The Indebted Earl, there will be a bonus novella! Joy to the World: A Regency Christmas Collection released in October of this year, and my novella, “Wonders of His Love,” is included. This novella takes us to Haverly Manor, the home of Marcus and Charlotte, for the Christmas season. Cilla Haverly, widow of the former heir, is wondering what her next step in life should be. Is she doomed to be the dowager’s companion forever, with no real place in society any longer? When an intriguing Scottish painter arrives to paint the portraits of the new Duke and Duchess of Haverly, he ignites in Cilla a spark of independence that has the dowager’s feathers ruffled and Cilla thinking thoughts of revolt . . . and love.

And finally, in March of 2021, the last installment of The Serendipity & Secrets series, The Indebted Earl, arrives. The story of Sophie Haverly, younger sister of the duke, The Indebted Earl takes the reader to the Devon coast as Sophie and Captain Charles Wyvern navigate grief, survivor’s guilt, rambunctious orphans, a dear woman suffering early dementia, smugglers, and a growing love that neither is sure is proper. 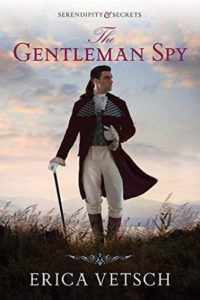