Things We Didn’t Say (Bethany House) is the debut historical romance novel by Amy Lynne Green. Amy works as a publicist by day and as a freelance writer by nights and weekends. She was the 2014 winner of the FamilyFiction short story contest. In our exclusive interview, Amy shares what drew her to setting her story during World War II, what her challenges were and what she hopes readers will take away after reading Things We Didn’t Say.

Tell us about your protagonist, Johanna Berglund.

Johanna, known to most as Jo, speaks multiple languages fluently and is perfectly at home in her usual study nook in the library, preferably with a cup of tea. She’s not, however, known for being great with people. She speaks her mind without worrying about tact, and her witty sense of humor has been also known to get her in trouble. If you’re one of the few who gets to know her well, though, you’ll find she also has a heart for the underdog and a fierce determination to protect the ones she loves.

What drew you to tell her story?

For my story, I wanted to create a fictional prisoner-of-war camp for German soldiers, similar to the real ones in Minnesota, that needed a translator to help with public relations between the POWs and the suspicious small-town locals. As you can tell from my description … Jo would be terrible at that. Unfortunately, Jo is the only one they have, and with her language scholarship at stake, she doesn’t feel like she can turn the job down.

You have a novel set during WWII, that deals with the politics of the time, patriotism and POWs. Which did you find to be the most challenging part to research and then write about?

Jerry Yocum from the Prisoner of War Museum in Algona, Iowa, made it easy by giving me a tour of the displays (including books of POW letters), then handing me a flash drive of research gold: hundreds of newspaper articles, maps, menus—everything he had on the POW camps in Minnesota. Harder was writing about the students at the top-secret Japanese language run by the Army and based in Minnesota, as seen in my character Peter Ito. Not because there wasn’t any research material, but because I wanted to represent the Japanese-American students and teachers accurately. The questions they struggled with as they served a country that wasn’t honoring their rights as citizens were complex, and I came to deeply admire their sacrifice.

What part of the process of writing your debut novel surprised you the most?

Things We Didn’t Say is written entirely in letters, newspaper articles, and other documents. Although I’d read epistolary novels, I had no idea if I could pull one off myself and was shocked to find it was … fun! I started with the very first letter—Jo writing her lawyer about being accused of treason—with no idea how the story was going to take her there. The rest of the book is a flashback of documents that give glimpses into Jo’s life, friendships, struggles, and heartache—and lets the reader solve the mystery along with her.

What would you like readers to take away after having read Things We Didn’t Say?

I hope readers see themselves in some of the characters and are challenged to think about what it really means to love our neighbors—even when those neighbors are difficult to love. But I also hope they get the inexplicable urge to write a good, old-fashioned letter. 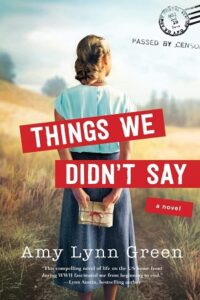