Veteran, pastor, and Christian fiction historical author, Terry Thompson, is no stranger to leading under adversity, and his retelling of the book of Daniel in Daniel: Prophet at the King’s Command, a Novel (Ambassador International, March 30, 2021) captures the true strength and courage of this biblical hero. Suddenly dragged from his childhood home and brought to a foreign land, Daniel has two choices in front of him: reject the God he serves and embrace the debauchery around him or his risk the king’s wrath to remain steadfast in his faith. Daniel risks his very life, creature comforts, and immediate future to grow into the prophet and hero for untold generations to come. In this interview, Terry shares his inspiration behind writing Daniel: Prophet at the King’s Command.

FF: What motivated you to write Daniel: Prophet at the King’s Command?
I had felt led to write a Bible-based novel for some time. During the teaching of a small-group Bible study on the Book of Daniel, I become fascinated with the prophet and the realization that so much obvious back story wasn’t in the Bible. My initial historical research convinced me that there was more than enough information available to develop an intriguing and inspirational story.

FF: How long did it take you to research and write this book?
I researched secular ancient history and scholarly Bible commentary for about six months before beginning the writing. The rest of my extensive research developed with the writing of the book for over a four-year period.

FF: Are you interested in pursuing more historical or biblical fiction writing projects?
Possibly. But for the next year, I just want to concentrate on promoting this book.

FF: How did your military background affect how viewed Daniel and wrote about him?
In the military, one has to be loyal to the government of the nation defended, even when that government doesn’t meet one’s standards or beliefs, unless government actions violate biblical truths. I drew on that experience in portraying Daniel’s response to the pagan government he served.

FF: What do you hope people glean most from this book?
How to live and serve in an ungodly culture and how to prepare for the inevitable times prophesied by Daniel. These are take-aways very applicable to today’s society. 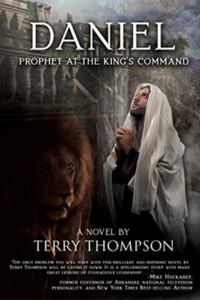 Buy Daniel: Prophet at the King’s Command from the FF Store HERE!

Buy Daniel: Prophet at the King’s Command from Amazon HERE!