Lisa Wingate is a former journalist, inspirational speaker, and bestselling author of more than twenty novels. Her work has won or been nominated for many awards, including the Pat Conroy Southern Book Prize, the Oklahoma Book Award, the Utah Library Award, The Carol Award, the Christy Award, and the RT Booklovers Reviewer’s Choice Award. The group Americans for More Civility, a kindness watchdog organization, selected Lisa along with six others as recipients of the National Civics Award, which celebrates public figures who work to promote greater kindness and civility in American life.

Her historical novel Before We Were Yours (Ballantine) is based on one of America’s most notorious real-life scandals: Starting in the 1920s, Georgia Tann, director of a Memphis-based adoption organization, kidnapped and sold poor children to wealthy families all over the country. Before We Were Yours is a riveting, wrenching, and ultimately uplifting tale reminds us how, even though the paths we take can lead to many places, the heart never forgets where we belong.

In this interview, Lisa explains what inspired her to write the novel, shares her journey to becoming an author, and reveals the research she did to get the details right.

How did the idea for Before We Were Yours originate? 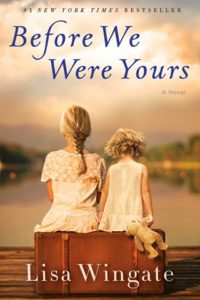 I was up late one night working on materials for a different story, with the TV playing in the background. A rerun of the Investigation Discovery: Dangerous Women segment about Georgia Tann cycled through at about two in the morning. I tuned in and immediately became fascinated with this bizarre, tragic, and startling bit of history. I was shocked by the scope of Georgia’s network, the number of lives she affected, and the tragic consequences of her cruelty and greed.

What, I wondered, could motivate such a person? How could so many others – law enforcement officials, welfare workers, court workers, caretakers – be coerced into taking part in, or at least turning a blind eye to the kidnapping and abuse of so many children? How could an estimated five-hundred children have simply vanished from the care of Georgia’s Tennessee Children’s Home Society, with no investigation of their whereabouts and probable deaths? How could ordinary people have failed to question Georgia’s frequent newspaper ads, offering children as “Christmas presents” and “Yours for the asking?”

How long have you been at work on this book? Did the book involve special research?

The book was research-intensive. I took in everything I could find about the Tennessee Children’s Home Society in Memphis and Georgia Tann. In large part, I found bits of the story here and bits there. The Discovery Channel’s Deadly Women and 60 Minutes provided helpful information and visuals.

Several books, including Babies For Sale by Linda Austin and The Baby Thief by Barbara Raymond were particularly helpful in researching the adoption scandal. Harlan Hubbard’s Shantyboat Journal was a beautiful account of shantyboat life on the river. I also spent time in Memphis, researching locations, combing through the river museum, visiting the library and the university’s photo archives, and talking to people who remembered the scandal.

Have you always known you wanted to be a writer or was it an idea that came along later in life?

I’ve loved to write for as long as I can remember. My older brother was a good writer, and when you’re the youngest in the family, you want to do what the older kids do. When he won a school award for his poem, “The Bee Went Under the Sea,” I was so impressed by his literary brilliance (and the blue ribbon) that I immediately went to my bedroom and created my first book, The Story of a Dog Named Frisky. Frisky’s tale was cleverly illustrated and published on manila paper in multiple editions which sold very well in the grandparent market.

Before We Were Yours tells a story within a story. Are dual time frame stories a challenge to write?

It’s always a challenge to balance dual time frames and a story within a story. It falls into the category of double-the-work and double-the-risk, but also double-the-fascination and double-thereward. There’s twice as much research, but in doubling the research, you also discover twice as many interesting historical facts, unanswered questions, and nearly-forgotten bits of history.

Those fascinators weave new threads into the story loom. For me, the biggest challenge was balancing the two stories, ensuring that both would be fully satisfying, and that the historical story would serve a purpose in modern-day characters’ lives.

How did you write 30 books in 15 years with a family to take care of?

I’ve always loved to write, but I didn’t get serious about freelance writing and selling until after I’d graduated college, married, and started a family. I wrote and sold various smaller projects between naps, diapers, and playgroups.

And when the boys were older, during soccer practices, in carpool lines, while helping with homework, and in all sorts of other situations. People often ask me if I need quiet in order to write. With boys in the house, if I’d waited for quiet, the writing would never have happened. I learned to lose myself in a story amid the noise of life and I loved it that way.

I asked myself what makes a story last, what really makes a story worth telling and worth reading? I wanted to write books that meant something, that explore the human soul.

One day, I came across a notebook in which I’d written some of my grandmother’s stories of growing up in the depression era. I’d never known quite what to do with those stories, but I knew they were significant in my life. When I rediscovered the notebook, I had the idea of combining my grandmother’s real stories with a fictional family who is like and unlike my own family. That little gem of an idea became my first women’s fiction novel, Tending Roses.

Now that the boys are grown and the house is quiet, I’m redefining the writing routine again. Just as in books, life is a series of scenes and sequels, beginnings and endings, and new discoveries.

Have you had help along the way in your writing career? Who were your mentors? 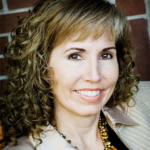 A special first grade teacher, Mrs. Krackhardt, put the idea of being a real writer into my head. She found me writing a story one day at indoor recess, and she took the time to stop and read it. When she was finished, she tapped the pages on the desk to straighten them, looked at me over the top and said, “You are a wonderful writer!”

That was a defining moment for me. In my mind, I was a writer. When your first grade teacher tells you that you can do something, you believe it.

I was in her class for only a few months before we moved again, but during that time, she left an indelible mark on my life. It’s funny how we have defining moments in our lives, and that time in Mrs. Krackhardt’s class was one of mine.

For years, I couldn’t have told you what she looked like, or whether she was a young teacher or an old teacher, but I could have told you that she said I was a wonderful writer. When I left her class, she wrote on my report card, “Keep that pencil working with that wonderful imagination, Lisa!” and “I expect to open a magazine and see your name listed among the contributors.”

I still have that report card, and I never forgot those words, or the way her confidence in me gave me confidence. Publishing is a difficult business, but I always believed I could do it, because my first grade teacher told me so.

I was fortunate enough to grow up in a family of great storytellers. I classify them among my writing mentors, as well. Nights gathered around the outdoor fire pit on my grandparent’s farm were a lesson in weaving together stories in a way that could hold an audience breathless until the final line.

Some of those stories were funny and some were sentimental, but the older folks in our family could hold an audience hostage with a tale about going to the grocery store, or getting a haircut. Even from a very young age, I remember being not only enamored with their stories, but fascinated by their skill.

Reality and fiction were seamlessly intertwined to create a weave that was flawless. They never let the truth get in the way of a good story, and it was impossible to tell which was which. Both were equally delightful.

Before We Were Yours
Lisa Wingate
Ballantine
Buy the book from our store!