Jennifer L. Wright has been writing since middle school, eventually earning a master’s degree in journalism at Indiana University. However, it took only a few short months of covering the local news for her to realize that writing fiction is much better for the soul and definitely way more fun. A born and bred Hoosier, she was plucked from the Heartland after being swept off her feet by an Air Force pilot and has spent the past decade traveling the world and, every few years, attempting to make old curtains fit in the windows of a new home.

In this interview, Jennifer shares some thoughts on her latest novel, Come Down Somewhere.

FF: What is it that you enjoy about coming-of-age stories?
The transition from childhood to adulthood is paramount in our own personal stories. I think all of us can point back to specific instances from that time period in our lives that still, to this day, define certain aspects of our personalities. So much is changing within us at that age—not just physically but emotionally, mentally, and spiritually—that any outward changes, be they in personal circumstances or the world at large, have a profound impact on our development. For instance, I was an eighteen-year-old college freshman living away from home for the first time when the September 11 attacks happened. It was an event that absolutely changed our world but for me, because of the age I was, really seemed to mark a distinct end to my childhood. I find it a fascinating topic to explore in the realm of historical fiction—taking real-life history and coupling that with such a vulnerable time in my characters’ lives.

FF: Similar to your last book, your protagonist Olive is a spunky young woman. What draws you to this type of character?
I have such admiration for women who aren’t afraid to be who they are. There is oftentimes an expectation for women to be a certain way: to close their mouths, hide their flaws, and cater to who others want them to be. This was true back in the time periods in which I write, and it’s still true today to an extent. I even sometimes find myself kowtowing to pressure. Writing characters like Olive (or Kathryn from If It Rains) is a bit freeing; while neither of them is perfect, their audacity is a trait to which I aspire.

FF: What about the Trinity nuclear bomb test led you to write a novel about it?
My family and I moved to southern New Mexico in 2014, and we actually live less than a hundred miles from the Trinity test site. It’s a fascinating part of history I don’t believe is talked about enough, especially when you factor in the human side effects that are still being felt over seventy-five years later. This isn’t just history; where I live, it’s present in many people’s everyday lives, and a great deal of them feel forgotten. I wanted to bring this story to the forefront and draw attention to the overlooked and underappreciated sacrifice of the people of southern New Mexico during World War II.

FF: What sort of research did you do in preparation for this novel?
I read everything I could get my hands on about the Trinity test. Ferenc Morton Szasz’s The Day the Sun Rose Twice was an especially compelling read. The plethora of knowledge offered to me by the wonderful people at the Tularosa Basin Museum of History was invaluable. The most incredible part of my research, though, was actually traveling to the Trinity site and standing in the place where the world’s first A-bomb exploded back in July 1945.

FF: How did you incorporate faith in God into this story?
While everyone has their own opinion about atomic weapons and their role in warfare, what I found most compelling during my research was this fear the scientists had about how they were “playing God.” Most of us will never create a weapon capable of destroying the earth, but we all have instances in which we, too, make ourselves “gods” by choosing our own wants and our own desires over Him. In doing so, we almost always hurt those around us. I tried to explore this theme on both a large scale (Trinity) and small scale (the relationships between various characters) throughout the book.

FF: What was the most challenging part of writing this book?
I have been to Hiroshima and seen the remnants of the bomb dropped there. Now I live in southern New Mexico, as part of a military family but also part of a community that is still feeling the effects of the test. Because of this, my own personal feelings about Trinity are very complicated. I don’t think it was all bad, but I definitely don’t think it was all good either. Attempting to honor both those who worked on the bomb, believing they were doing something that would win the war and save lives, as well as those living here who were affected in monumental ways through the choices of others, was an extremely difficult balancing act.

FF: What do you hope readers walk away with after learning more about this moment in history through your story?
I hope readers have more of an awareness about what happened in the New Mexico desert in July 1945—about the unsung sacrifices of the people of this region and the sacrifices that are continuing to be made. But as always, more than anything, I hope readers walk away with a greater appreciation for the renewing and restoring power of Jesus. He is always and forever the answer to any question we have or circumstance in which we find ourselves.

FF: How did the writing process for this book compare to your debut novel, If It Rains?
I’d always heard that writing a second book is harder than the first. And I am here to say that is 100 percent true! Granted, Come Down Somewhere was written during the first and most intense weeks of the pandemic, though, so I’ll chalk up my difficulties to that, if only to make myself feel better. The general premise for If It Rains stayed pretty much the same through all stages of editing. If you were to read the first draft of Come Down Somewhere, you probably wouldn’t even recognize it as the same story. It changed a lot during various drafts, but I’m ultimately happy with the way it turned out, and I hope readers are too.

FF: What do you enjoy reading when you aren’t working on your own novels? Is here anything you read recently that you particularly enjoyed?
I’m a voracious reader across all genres, though I tend to gravitate toward historical fiction (naturally). I loved Sarah Sundin’s Until Leaves Fall in Paris and Melanie Dobson’s The Winter Rose. Outside of that genre, I thought Jaime Jo Wright’s The Souls of Lost Lake and Morgan L. Busse’s Secrets in the Mist were both really fantastic.

FF: Are there any other historical moments you’d be interested in exploring through fiction?
I ventured into World War II with this book, but I find myself constantly drawn back to the 1920s and 1930s, which is where my writer’s heart truly lies. I’m currently working on a book inspired less by a historical moment and more by historical people—a certain pair of Prohibition- era lovers with a penchant for robbing banks and stealing cars. After that, only time (and my wandering imagination) will tell.

Book Summary:
Sixteen-year-old Olive Alexander has lived on a ranch in the Jornada del Muerto region of southern New Mexico her entire life. But when World War II begins, the government seizes her family’s land for the construction of a new, top secret Army post.

While her mother remains behind, Olive is forced to live in nearby Alamogordo with her grandmother and find a place in a new school. When Jo Hawthorne crosses her path, Olive sees a chance for friendship—until she learns that Jo’s father is the Army sergeant who now occupies her beloved ranch. Already angry about her new reality, Olive pushes Jo away. But as she struggles to make sense of her grandmother’s lapses into the past and increasingly unsettling hints about what’s happening at the ranch, she slowly warms to Jo’s winsome faith and steady attempts at friendship . . . until one devastating day when the sky explodes around them and their lives are torn apart.

Seven years later, Jo returns to Alamogordo, still angry and wounded by the betrayals of that fateful day. Determined to put the past behind her once and for all, Jo hunts for answers and begins to realize the truth may be far more complicated than she believed, leading her on a desperate search to find her friend before it’s too late. 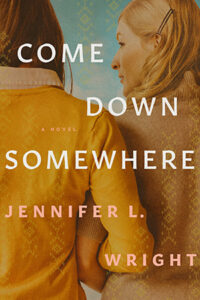 Buy Come Down Somewhere from the FF Store HERE!