The filmmakers behind the latest God’s Not Dead film talk about the ministry value of talking with the world instead of at the world. 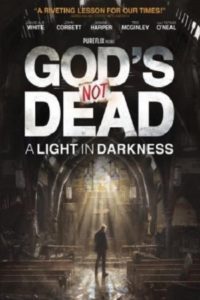 A church destroyed. A congregation silenced. A relationship shattered. Yet even in life’s darkest valleys, a small flame can light the way toward healing and hope. That’s the plot and the promise of God’s Not Dead: A Light In Darkness, the third film in the God’s Not Dead franchise. The film is now available for home viewing from Pure Flix, the largest independent faith and family film studio in the world.

God’s Not Dead: A Light In Darkness is an inspirational drama that centers on Pastor Dave Hill (David A.R. White) and the unimaginable tragedy he endures when his church, located on the grounds of the local university, is burned down.

But his dreams of rebuilding the church face an unexpected setback when university officials reject his plans to rebuild, determining that the church is no longer relevant in today’s society.

Facing a court case and his own struggle to see Christ’s light in heartbreak, Rev. Dave asks for help from his estranged brother Pearce (John Corbett), a big-city lawyer turned atheist, to fight for his brother’s church to rebuild. The family reunion opens old wounds, as the brothers wrestle with the questions that pulled them apart years ago.

Even while grappling with these personal issues, Rev. Dave must face another dilemma, turning to his former protégé Josh Wheaton (Shane Harper) for wisdom in answering the thorniest practical question before him: Can Christians fight for their rights and still be a loving example for Christ at the same time?

“In our society and culture right now, we have a lot of darkness,” explains White, who returns to the role of Rev. Dave and again serves as a producer. “There’s a lot of anger. There’s a lot of fighting. You can’t turn on the news for even a second without seeing something that’s really disturbing. This is a time in our society when it seems like we have so much tension going on–we have the left, we have the right and nobody can agree on anything. This movie really brings that out. It’s a movie about hope, about love, about healing and ultimately, forgiveness.”

But the way those questions are being debated by most, including Rev. Dave, are not ideal. “Many of us are so protective about our own views and our own points of view that we stop listening,” says Ted McGinley, who plays Thomas Ellsworth, Hadleigh University’s dean and Rev. Dave’s close friend. “The reality of this movie is that these are all people who may be right in their own groups. This movie is not about ‘the Christians’ versus ‘the villains.’ It’s about everyone. There are a whole bunch of people in this movie who aren’t incorrect. They’re just two different sides, and they’re not listening to each other.”

Into this contentious environment comes Pearce Hill, Rev. Dave’s brother, a big-city lawyer who drifted away from his family years earlier, when he drifted away from his Christian faith. The siblings’ reunion is rocky on multiple levels, but Dave has nowhere else to turn in his fight to rebuild his church.

“Pearce is reluctant to help, but Dave is his brother, so he decides to help,” says Corbett. “But there’s also something about returning home and breaking through those walls they put up after drifting apart. As it turns out, we find a greater love and understanding when we find a common denominator of leaning on each other. I come alongside my brother to conquer something that was insurmountable.”

“This film’s important because it can spur a conversation among people with differing views in today’s culture, where oftentimes the loudest voice is the only one we hear,” Corbett says. “And this film illustrates honest and positive interacting between people who think differently, and it’s done with respect and compassion.”

“It’s really about not being judgmental, but loving,” McGinley says. “Just because somebody has a different point of view, a different idea of what they think is right and wrong, it’s OK. It doesn’t mean we can’t listen to each other. That we can’t work it out. Because butting heads, constant conflict, is never going to work. We’re all in this together; it’s not going away. So let’s work together and find a way. And what a great way to do it – through God and with God.” 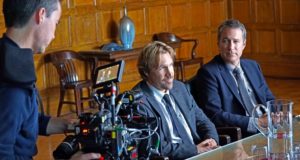 Producer Brittany Yost says, “Our biggest desire is for believers to walk away from this film and stop saying to each other, ‘We’re victims in this.’ When it comes to atheists, especially, we like to play the us vs. them game. And that’s not the case. We really need to understand how to minister through love, through unity, through community.

“We can easily get caught up in our own bubbles, and I love challenging people to think outside of their own bubbles,” Yost adds. “That’s the challenge to us as Christians, to really explore what it means to love our enemies and love our neighbors as ourselves. If we continually separate ourselves from others, if we continue to say, ‘They don’t understand; they’re not part of my world, they’re not part of my church,’ then they’re not going to know who Christ is.”

Creating a movie that captured the essence of what made the first two God’s Not Dead films resonate with audiences but still carved out exciting and meaningful new ground for itself was the filmmakers’ goal from the onset. Producer Brittany Yost says she and her colleagues “wrestled a lot” with the story and its themes.

“We ended up challenging ourselves with looking at today’s issues. And we landed on a very personal story that looks at very personal issues,” she says. “The fans of God’s Not Dead can get really excited about this film. It’s a totally different approach than we’ve taken in the past.”

That approach includes more action than ever before, and some plot twists that will leave some mouths agape, according to Benjamin Onyango, who reprises his role as Rev. Jude.

“People are going to be shocked at certain things that happen onscreen,” he says. “But the message is still the same. That’s why it’s called A Light In Darkness–it’s a message that spreads the truth of God and enlightens people that there’s a better path to follow that will lead to a better place.”

In doing so, McGinley says, the movie “cuts a wider swatch” of audience appeal than the typical faith-based film.

“Here’s the conundrum when you do these films,” says McGinley. “There’s a huge group of people that don’t want to see it because it’s ‘one of those movies.’ And there’s another group of people who are only going to see it because it is ‘one of those movies.’ So the idea is to make it something where people don’t have to be hit over the head with verse, but the people who recognize love, faith and grace will see it in the film. And the people who just come to see the film will be taken aback by love and grace and faith. And say, ‘What was that?’”

For White, a producer of the film as well as its star, the latest movie is the perfect mix of past and present offering hope for the future.

“What the God’s Not Dead [films have] been about is taking these questions that are being asked not just by people of faith but by human beings everywhere, and showing how they relate to our existence and answering them in honest and inspirational ways,” he says. “This movie is as relevant today as the others were during their release, because no matter what side you’re on, it brings important issues to light and opens up conversation.”

God’s Not Dead: A Light in Darkness
PureFlix

After a deadly fire rips through St. James Church, Hadleigh University leaders use the tragedy to push the congregation off campus, forcing the church to defend its rights and bringing together estranged brothers for a reunion that opens old wounds and forces them to address the issues that pulled them apart.