The DVD, featuring an important lesson in sharing, captures all the fun of the live tour with energetic dancers, loads
of bubbles, confetti, big bouncy characters and 18 of the most classic and popular VeggieTales silly songs
performed live on a stage, including “His Cheeseburger,” “Love My Lips!,” and “The Hairbrush Song,” plus a few
hits from the 80’s that both parents and kids will enjoy! There are also several fun and family-friendly bonus
features, such as a peek behind the curtain on “Larry’s Backstage Pass.”

“After our successful Live! show tour last fall, we wanted to bring the VeggieTales’ high-energy and hilarious
performance into households everywhere across the country,“ said Leslie Ferrell, General Manager of Big Idea
Entertainment. “We’re happy to provide this fun DVD full of music that’s perfect for the entire family.”

DVD Synopsis
Bob, Larry and the whole crew are taking to the stage with the silliest Silly Song Countdown ever! This high energy
song and dance spectacular takes silliness to a whole new level! But sometimes silliness just isn’t enough!
Archibald Asparagus prefers songs that have lessons, Mr. Lunt wants to sing about food, and Jimmy and Jerry are
stuck in the 80’s! But there’s only so much time…will the VeggieTales crew learn the importance of sharing so that
the show can go on and everyone will be able to sing themselves silly? 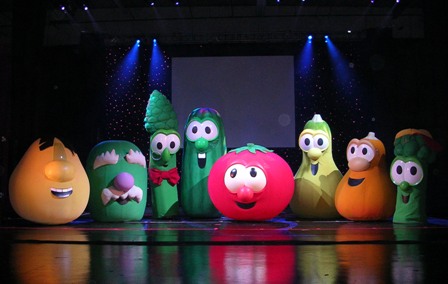